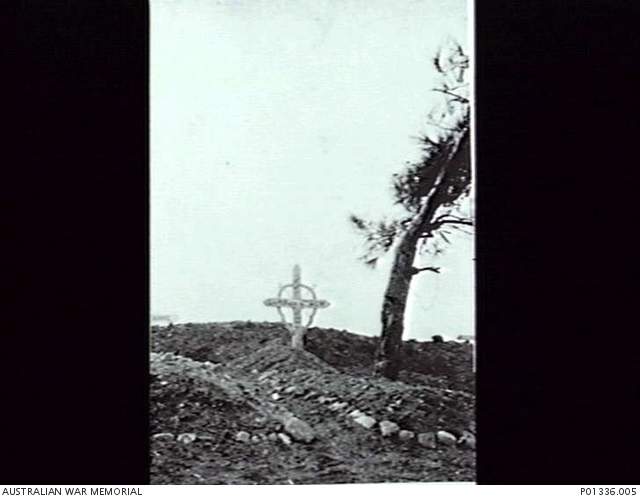 The grave of Lieutenant (Lt) Henry Robson, 6th Australian Light Horse Regiment marked with a white cross and, on the left, the grave of Lieutenant-Colonel (Lt Col) Hubert Jennings Imrie Harris 5th Australian Light Horse Regiment. Lt Robson, a veteran of the Boer War, was an auctioneer from Lismore, NSW prior to enlistment and embarked with the rank of Second Lieutenant with C Squadron from Sydney on HMAT Suevic on 21 December 1914. Whilst serving at Gallipoli, he was killed in action on 24 July 1915, aged 48. Lt Col Harris, also a Boer War veteran, was the General Secretary of the Queensland Ambulance Transport Brigade prior to enlistment and embarked from Sydney as the Commanding Officer of his Regiment on HMAT Persic on 21 December 1914. On 31 July 1915 whilst at Leane's Trench, Gallipoli, he was killed in action, aged 44. Harris Ridge at Gallipoli was named in his honour. Both men were buried in the Shell Green Cemetery, Gallipoli.