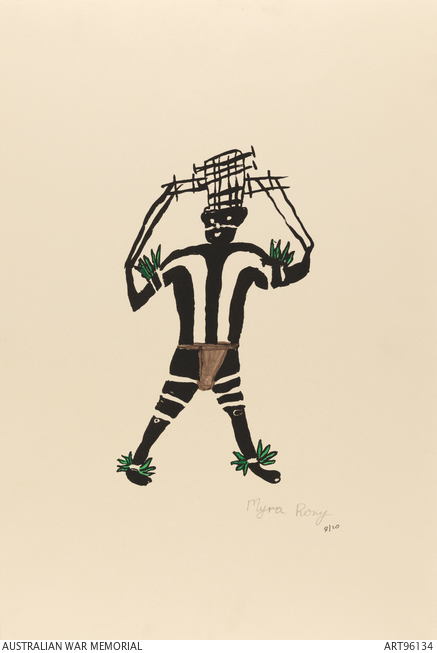 Screenprint of a figure wearing aeroplane headdress with body paint.

The work depicts a contemporary portrait of a Yanyuwa Dancer performing the Ka-wayawayama, also known as the Aeroplane Dance. The performance was composed by a Yanyuwa man to retell the story of an American bomber that crashed in the Gulf of the Carpentaria in 1942. Four American pilots were left stranded after the crash, and only one survived after being rescued by the Yanyuwa community. He had wandered over 300 miles for 140 days across the north of Australia before coming across help.

The Ka-wayawayama is one of a handful of wartime dances composed and performed by Indigenous communities in the north of Australia. A common subject of these dances is the tracking and rescue of Allied and enemy personnel. It was one of the many significant roles played by Indigenous people on the homefront during the Second World War.