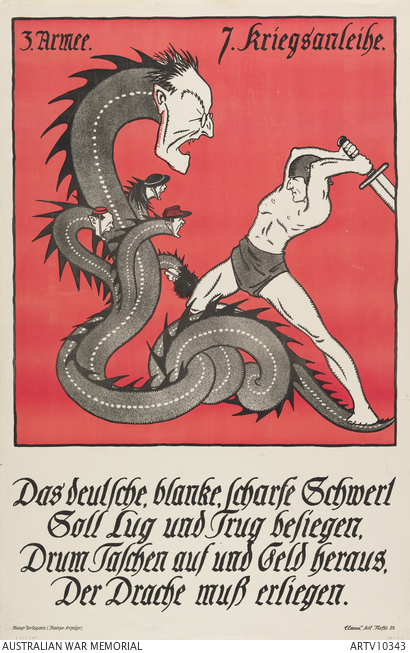 Public subscription to a series of nine war loans provided over 60% of Germany's war costs. Posters promoting war loans aimed to empower and mobilise the civilian public, and became more aesthetically creative as the war went on. Working within an established cultural context, German poster designers could rely on high levels of literacy in the public, and so posters usually incorporated a great deal of written information. Imperial emblems, chivalric imagery and gothic script were also used to allude to medieval German woodcuts and Teutonic paganism. Such images of German romanticism called to mind a culturally and ethnically superior Germany, stressing the historic mission of the German culture. Produced to promote the 7th War Loan, this poster depicts a youthful lone German warrior courageously fighting off a five headed serpent-like dragon. Each head is designed to represent the enemy allies (the largest representing a particularly vicious Woodrow Wilson) and the poem below promises that the 'German sharp sword' will triumph over deception as long as money is provided. The poster stresses the need to defend Germany's past cultural and economic achievements, with gothic text used to invoke tales of gallant medieval knights slaying dragons in German literature. This is one of 13 First World War posters purchased by the Memorial at the auction of the Dr Hans Sachs poster collection in 2013. Berthold Clauss (1882-1969) was a painter, lithographer, illustrator and sculptor.