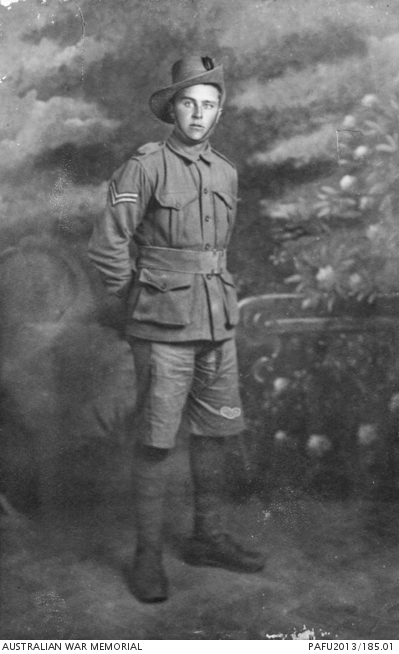 The Last Post Ceremony is presented in the Commemorative area of the Australian War Memorial each day. The ceremony commemorates more than 102,000 Australians who have given their lives in war and other operations and whose names are recorded on the Roll of Honour. At each ceremony the story behind one of the names on the Roll of Honour is told. The story for this day was on Lieutenant Frank Watts Davis, 50 Battalion, First World War.

Frank Davis was born in Wilcannia, in outback New South Wales. His father died when he was five years old, and his mother remarried. On the outbreak of the First World War he and his family were living in Port Lincoln, South Australia, and he was working as a fisherman. He travelled to Adelaide to enlist at Oaklands in December 1914.

Davis was posted to the 10th Battalion. After serving on Gallipoli, he was transferred to the 50th Battalion as a part of the reorganisation of the AIF and sent to France.

Davis was recommended for his "great devotion to duty near Mouquet Farm" in mid-August, and although he did not receive a medal, he was given a commission to be a second lieutenant in late August as a reward from his battalion.

The 50th Battalion spent the bitterly cold winter of 1916-17 in and out of the front line trenches, manning the line and providing working parties to improve defences. This was a particularly hard winter, and the 50th Battalion recorded at least two other ranks a day sent to hospital sick from the cold conditions.

It was a cold day in February 1917 that Frank Davis was killed while the battalion was working in the front line. Davis was speaking to platoon Sergeant Gomer Maslin when a shell burst among the platoon. Davis was killed instantly, and Maslin died two days later from his wounds.

Frank Watts Davis was one of two sons of Martha Kelly to die in the war. His brother Thomas Arthur Davis was killed on Gallipoli during the August offensives.

A letter in his service record reads:

You will find a little ring attached to my disc around my neck. I want the comrade or whoever that finds me will just forward it to this address with my dying love [to] Miss M. Murray ... Port Lincoln, South Australia ... If she gets the ring she will know I did not forget her.

It is not known if Frank Davis' sweetheart ever received the ring.

His name is listed on the Roll of Honour on your left, along with around 60,000 others from the First World War, and his photograph is displayed today beside the Pool of Reflection.

This is but one of the many stories of courage and sacrifice told here at the Australian War Memorial. We now remember Lieutenant Frank Watts Davis, and all of those Australians who have given their lives in service of our nation.