Informal portrait of NORFORCE recruit Farrah Flowers. One of a series of photographs taken by ... 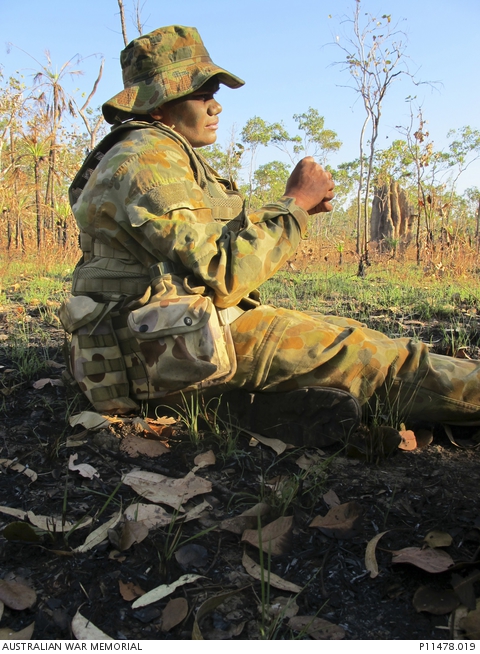 Informal portrait of NORFORCE recruit Farrah Flowers. One of a series of photographs taken by Tony Albert, the Australian War Memorial's first official artist for the North West Mobile Force (NORFORCE). In May 2012, the Memorial commissioned Albert to explore the relationship between the Australian Defence Force (ADF) and Indigenous Australians as a way of acknowledging the vital role played by Indigenous communities in the defence of Australia. As part of this commission, Albert photographed members of NORFORCE's 2012 recruit intake as they undertook training in northern Australia. Indigenous soldiers make up fifty per cent of NORFORCE's personnel, and patrol in the area they were recruited from in order to draw on their local knowledge.

NORFORCE was formed in 1981 as an Infantry unit of the Australian Army Reserve. Its primary role is reconnaissance and surveillance in northern Australia. The unit observes and reports; the personnel do not hold ground or capture people. NORFORCE has around 65 regular personnel and 435 reservists at any one time.