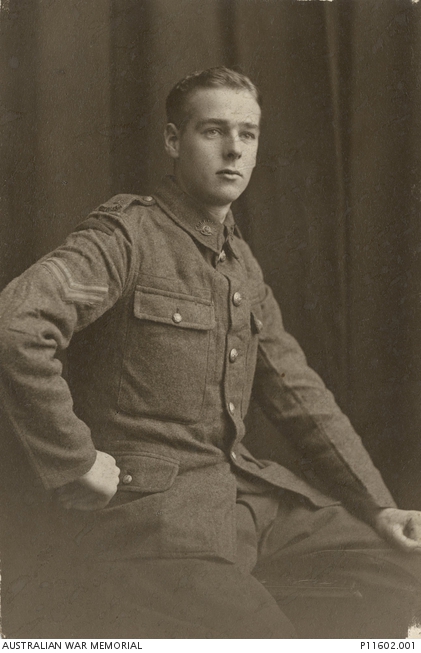 Studio portrait of Corporal (Cpl) Jack Marchmont Campbell, 2nd Battalion. A salesman of North Sydney, NSW, Lance Corporal Campbell embarked from Australia on 18 October 1914 aboard HMAT Suffolk (A23). He was promoted to Corporal on Gallipoli. In October 1915 he contracted influenza and was sent to hospital in England. In March 1916 he was promoted to Sergeant and transferred to the 54th Battalion. Sergeant (Sgt) Campbell was killed in action on 19 July 1916 at Fromelles, France. After the war his grave could not be located and he was commemorated on the VC Corner Australian Cemetery Memorial, Fromelles, France. In 2008 a burial ground containing the bodies of 250 British and Australian soldiers was located at Pheasant Wood, France. The soldiers died during the Battle of Fromelles on the night of 19-20 July 1916 and were buried by German troops. In 2010 all of the remains were reburied in the newly created Fromelles (Pheasant Wood) Military Cemetery. At the time of the official dedication of the cemetery on 19 July 2010, ninety-six Australians had been identified through a combination of anthropological, archaeological, historical and DNA information. Since then other Australians, including Sgt Campbell, have been identified.