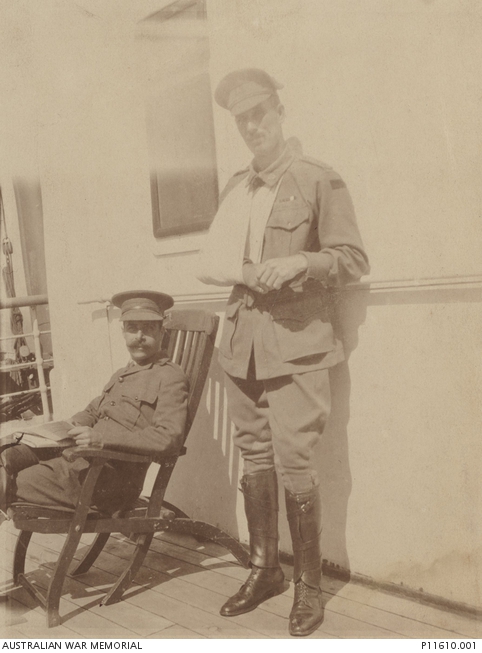 Informal outdoor portrait of Lieutenant (Lt) Alfred Shout (his wounded right arm in a sling) and an unidentified officer. Alfred John Shout was born in Wellington, New Zealand on 7 August 1881. As an eighteen year old during the Boer War, he enlisted in the Border Horse in Cape Colony on 17 February 1900. He was Mentioned in Despatches for recovering a wounded soldier while under heavy fire at Thabaksberg on 29 January 1901. In March he was promoted to sergeant. During his service in South Africa he was wounded in the chest but made a full recovery. He returned home briefly following his discharge from the Border Horse in May 1901 but returned to South Africa, becoming a sergeant in the Cape Colonial Forces. He married Australian-born Rose Howe in Cape Town in 1905. Their daughter, Florence Agnes Maud, was born soon afterwards.

The Shouts emigrated to Sydney in 1907, where Alfred was employed as a carpenter at Resch's Brewery. He joined the 29th Infantry Regiment soon after emigrating and obtained a commission on 16 June 1914. Enlisting with the AIF on 27 August 1914 as a second lieutenant with the 1st Battalion, he embarked for the Middle East on 18 October. Shout was promoted to lieutenant on 1 February 1915 during the training period in Egypt. His battalion landed at Gallipoli on 25 April and Lieutenant Shout immediately displayed the leadership and bravery that came to characterise his service on the peninsula. He and his company managed to advance and assist in holding the left flank of the feature 'Baby 700' throughout the day of 25 April but a determined Turkish advance forced their retirement at 4.30 pm.

The first days on Gallipoli were disastrous for the 1st Battalion. Over four days the battalion suffered 366 casualties and was scattered throughout the Australian front. Indicative of the esteem to which Lt Shout was held, even at this early stage in the fighting, is the following account:

Despite his resistance, Lt Shout was evacuated to HS Gascon on 11 May 1915. This photograph was captured during his two weeks of recuperation aboard the hospital ship prior to Lt Shout rejoining his battalion on 26 May. For his actions two days after the landing, he was awarded the Military Cross. The recommendation for the award reads:

On 29 July he was promoted to captain. His contribution during the first months of the fighting was further recognised with a Mention in Despatches in early August. A few days later the battalion was thrown into the Battle for Lone Pine. It was during the fighting on 9 August that Captain Shout was mortally wounded in the action for which he was awarded a posthumous Victoria Cross.

In the fourteen weeks that Shout was on Gallipoli he attained an almost legendary reputation among his peers. Between 25 April and his death three days after his 33rd birthday, he had won a Victoria Cross and a Military Cross as well as a Mention in Despatches, becoming Australia's most decorated soldier on the peninsula.