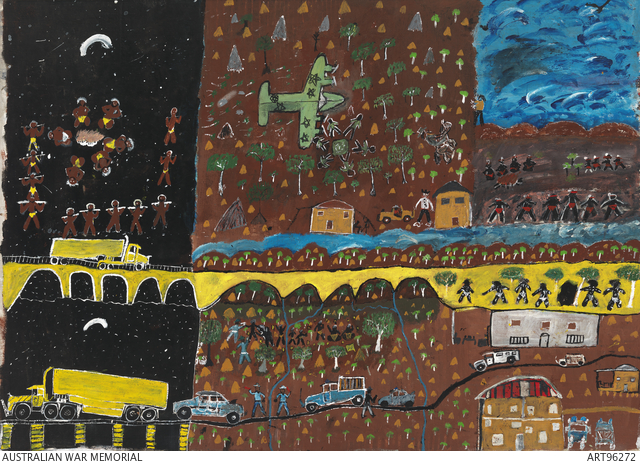 'In this painting I show how things have been changing over time in the Gulf country. In the top left is how things used to be with people living on country doing ceremony under the moon, being strong. Next to this is the crash in December 1942 of an American World War II aeroplane (B 24 Liberator). It came down after getting lost just off the coast in a huge storm. Some of the crew managed to jump before it crashed. When some of them met up on the ground they threw what they had down on a blanket. They didn’t have much: 4 chocolate bars, 1 jungle knife, 1 fishhook and a few matches. One group of them walked in a westerly direction. It was tough for them, it was the wet season, the rivers were flooded, they didn’t know the country or what to eat. After a few months being lost all of them died, except one fella (Sargent Grady S. Gaston) who you can see in the painting standin’, where he was found on the coast, lookin’ weak. He was found by an Aboriginal fella called Strike-a-Light (Kelly Martin’s father) who was riding his horse on the beach. He was part of a group of Aboriginal men out looking for the crew. Strike-a-Light took Sgt. Gaston to a place where he was looked after and given food before he was taken back to Borroloola and then on to his base in Townsville. To remember this event Aboriginal people in the Gulf perform ‘the Areoplane dance’ (Ka-wayawayama) which you can see in the right of the painting, below the saltwater. This shows the way we remember things through singing and dancing.' Jacky Green, 2013

Jacky Green (1953- ) is a Garawa artist from the southwest Gulf of Carpentaria in the Northern Territory. His artwork is instead underpinned by the Indigenous law taught to him by his grandfathers, uncles, and other senior kin from the southwest Gulf peoples; the Mara, Gudanji, Yanyuwa and Garawa. It is this knowledge that is reflected in his paintings and his commentary on wartime history in the community.