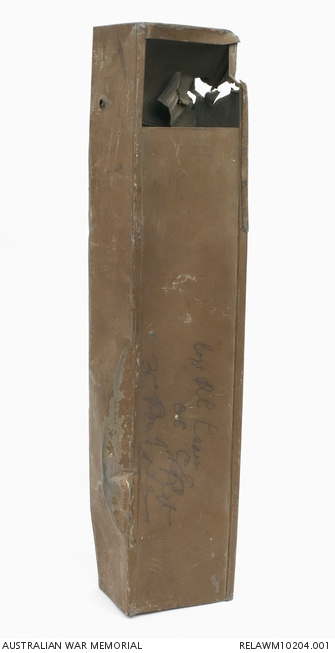 During the Gallipoli campaign Australian and New Zealand troops used both specially made and improvised trench periscopes to observe Turkish and German movements in their trenches.

This is an example of a battle damaged specifically built British No.3 Mk1 periscope, a type that was commonly issued to Australian and New Zealand Company Commanders on the Gallipoli campaign.

This particular example suffered a well aimed bullet strike from a Turkish sniper on 28 June 1915 when it was used as part of a 'demonstration in front of Pine Ridge trenches'. The demonstration was made to prevent Turkish reinforcements moving south to where the British were attacking. The 11th Battalion AIF suffered heavy casualties during this action, with all officers killed. The donor, one of the famous Leane brothers of the AIF, Raymond Lionel Leane, was himself slightly wounded.

Leane was a member of one of Australia's best known military families and served with distinction during the First World War. He was born on 12 July 1878 at Prospect, South Australia. After leaving school, Leane's job as a commercial traveller took him to Western Australia where he married Edith Laybourne in 1902. He was commissioned in the 11th (Perth Rifles) Infantry Regiment in 1905. In 1908 he began a successful career as a merchant in Kalgoorlie. Continuing his Militia service with the Goldfields Infantry Regiment, he was promoted to captain in 1910.

Leane enlisted in the AIF within weeks of the First World War's beginning. He was joined by every male of enlistment age in his extended family and became known as the head of what Charles Bean described as 'the most famous family of soldiers in Australian history'. Leane was given command of a company in the 11th Battalion and was among the first ashore at Gallipoli on 25 April 1915. In May he distinguished himself in a raid against Turkish positions on Gaba Tepe. The raid was unsuccessful, but Leane's leadership and courage under fire saw him awarded the Military Cross.

He was wounded for a second time at Gallipoli on 31 July while leading an attack against a Turkish position, soon to be known as 'Leane's Trench', which he held against strong counter-attacks. Promoted to temporary major in August and given command of his battalion in September, Leane was promoted to temporary lieutenant colonel in October. He remained on the peninsula until late November when he was evacuated due to illness.

In February 1916 Leane's promotion to major was confirmed and he was given command of the 48th Battalion. He was promoted to lieutenant colonel the following month. Serving under him in the battalion were a number of relatives including his brother and three nephews. The 48th became known throughout the AIF as the 'Joan of Arc Battalion' because it was made of all Leanes (Maid of Orleans). By the end of 1917, Leane's battalion had fought at Mouquet Farm, Gueudecourt, Bullecourt, Messines, Polygon Wood and Passchendaele, where Leane was badly wounded on 12 October 1917.

Returning to duty in January 1918, he commanded the 48th until his appointment as temporary, then permanent commander of the 12th Brigade in June 1918 when he was promoted to temporary Brigadier General. He led the brigade at Villers-Bretonneux, Amiens and the Hindenburg Line. A respected commander, brave in combat and concerned for his men, Leane was Mentioned in Dispatches eight times, awarded the Distinguished Service Order and Bar and was made a Companion of St Michael and St George and a Companion of the Bath.

After the war, Leane served as South Australia's police commissioner from 1920 and received a knighthood upon his retirement in 1944. He remained in the Militia however, commanding the 3rd Infantry Brigade from 1921 to 1926, finally retiring in 1938 after 12 years on the unattached list. During the Second World War he commanded the Volunteer Defence Corps in South Australia.

Leane remained in Adelaide until his death on 25 June 1962. He is buried in Centennial Park Cemetery.