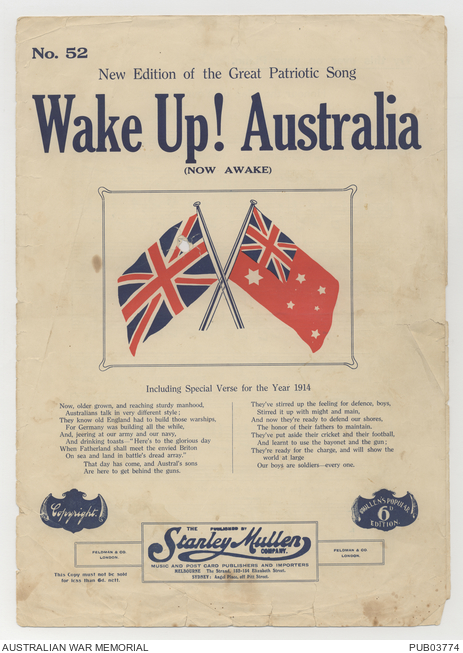 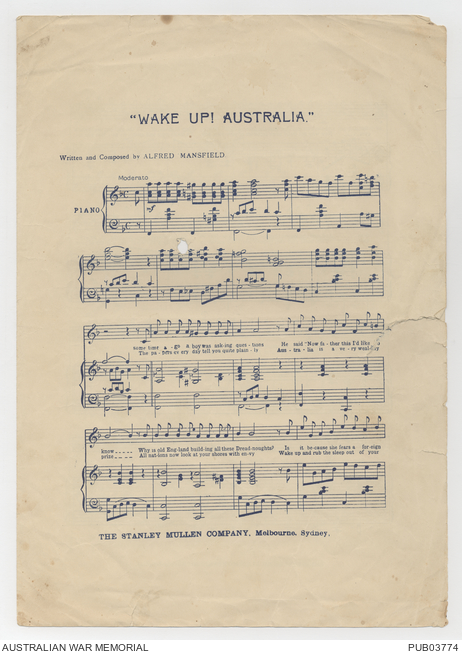 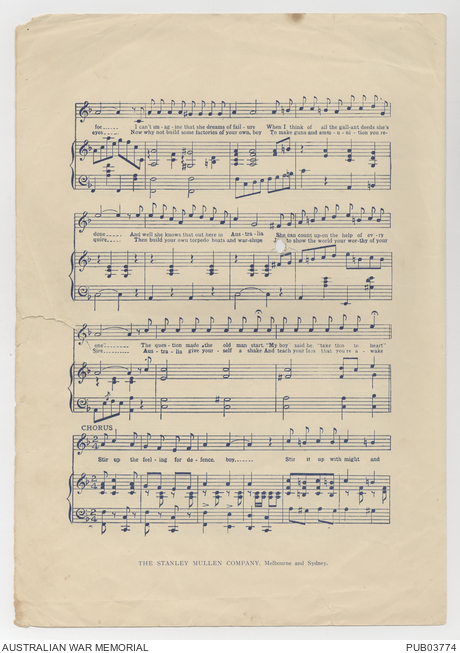 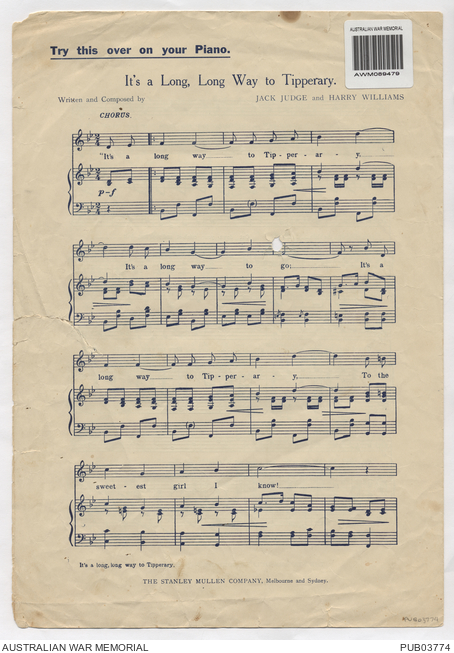 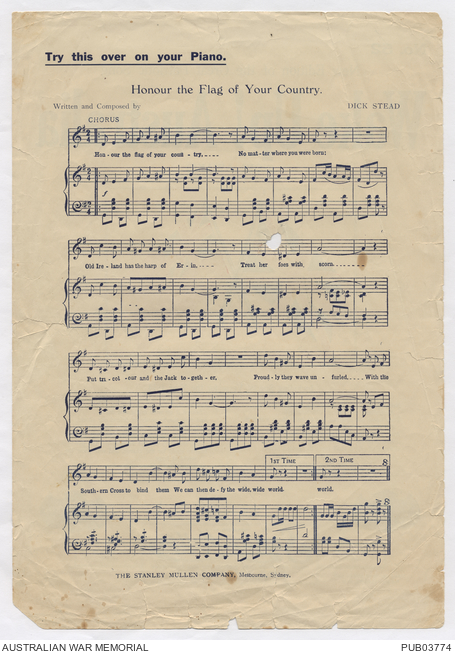 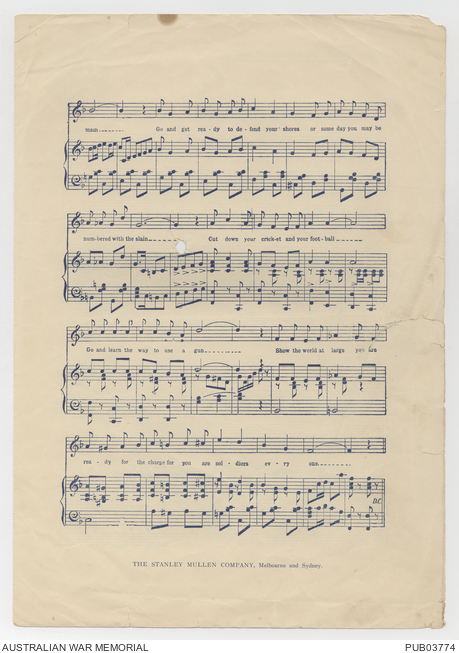 Sheet music for the song titled 'Wake Up! Australia (now awake)', with lyrics and music written by Alfred Mansfield. This is the second edition of the song which includes a verse that was added in honour of the year 1914.

This copy was published by the Stanley Mullen Company and features a colour image of the Union Jack and the Australian red ensign flags on the front cover. Underneath this image, are the lyrics added for the extra verse. The song is described at the top of the front cover as 'the great patriotic song'.

Inside the front cover is an advertising preview of 'Honour the flag of your country', with lyrics and music composed by Dick Stead. The song was originally published in 1910 and featured in William Anderson's pantomime, 'Babes in the woods'. The back cover features an advertising preview of 'It's a long, long way to Tipperary', written and composed by Jack Judge and Harry Williams. This copy of the sheet music also includes a preview of the original version of 'Wake up! Australia'.

The lyrics of this song discuss being prepared to defend Australia and encourage playing less sport in order to learn how to fire a gun. The opening lines discuss the number of dreadnoughts that are being purchased.

The song titled 'Wake Up! Australia (now awake)', was a popular song with fundraising events for organisations like the Red Cross, the Belgian Relief Fund and other appeals. About 75 pounds was raised for the Mayoress Patriotic Fund at Warnambool, Victoria, on 25 August 1914 with a procession featuring the local battery of the Field Artillery Brigade and several bands and a concert organised by Miss Myrtle Boyle. Master Freddie Gray performed the song ‘Wake Up! Australia’ which was described by the Warnambool Standard as ‘a very acceptable patriotic song’. His performance received a call for an encore to which he responded with ‘Rule Britannia’. Master Dan Brock sang ‘Wake up! Australia’ during an open air concert at Rainbow, Victoria, on 16 September 1914. The concert followed a torchlit procession that included several bands, the Australian Light Horse and a couple of other local organisations. The event was described as a ‘patriotic carnival’ by the Rainbow Argus and was organised to raise money for sick and wounded soldiers. A concert was held at Moama, New South Wales, to raise money for the Belgian Relief Fund on 18 March 1915. The evening concluded with an encore following a performance of ‘Wake up! Australia’ by Mr R Anketell. Miss Ruby Martin organised a concert to raise money for the Red Cross at Townsville, Queensland, on 9 April 1915. The concert featured a performance of the song ‘Wake up! Australia’ by Master F Davis. The local newspaper reported that he ‘immensely pleased the audience’ with his performance.

This was also a popular song with touring groups of entertainers in Australia during the First World War period. The Westernport entertainers performed at Frankston, Melbourne on 7 August 1914 with Mr B Jones performing this song during the concert. Miss Ness, a member of the Dimboola Peirrots performed this song at Dimboola, Victoria on 7 August 1915. She appeared with the group in subsequent shows during December 1915, at Nihill and Rainbow, where her performances were met with mixed reviews by the local newspapers.

Farewell and welcome home receptions for locals who had enlisted and subsequently served in the Australian Imperial Force also featured this song in musical programs. Six men from Beaufort, Victoria were farewelled after enlisting in the Australian Imperial Force with a concert in their honour on 25 August 1914. Mr B A Stewart sang ‘Wake up! Australia’ during the concert. Five local men from Winchelsea, Victoria, were farewelled with a concert on 22 January 1915. The song ‘Wake up! Australia; was performed by Mrs Ambrose McCallum. Private F Hamilton was farewelled at Middle Creek, Victoria, with an impromptu concert on 22 July 1915 in the local hall. The song ‘Wake up! Australia’ was performed by Mr R Robinson.