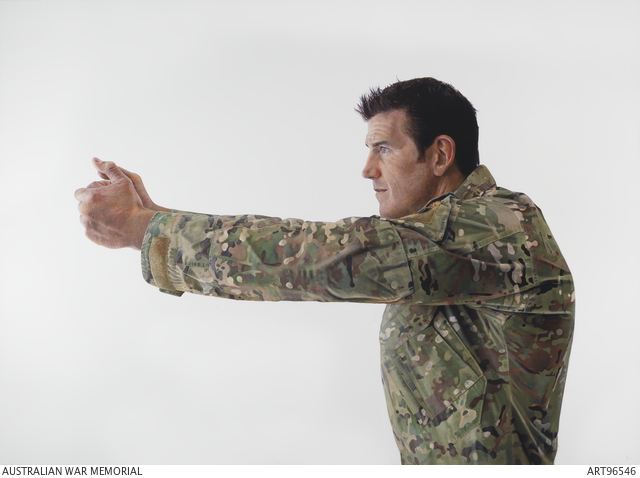 Michael Zavros was commissioned by the Australian War Memorial to paint Victoria Cross recipient Ben Roberts-Smith’s portrait. This portrait was created from studio sittings and photographs. Zavros observed that when he asked Roberts-Smith to pose in a fighting stance, “He went to this whole other mode. He was suddenly this other creature and I immediately saw all these other things. It showed me what he is capable of … it was just there in this flash.”

In creating the work, Zavros painted it layer by layer, starting the painting in brown and white, then building the work up with colour. “It allows you to paint brighter colour but to have all of this meat underneath. The surface itself appears to have a depth, especially something as translucent as skin.” The work is photorealist in style and technique, and you can see Roberts-Smith’s freckles, wrinkles and hairs.

Michael Zavros is a leading Australian artist whose work has been exhibited in major museums throughout Australia, New Zealand, Asia and Europe. He has received numerous awards, including the Bulgari Art Award and the Doug Moran National Portrait Prize.