[Sheet music] Sing us a song of Australia 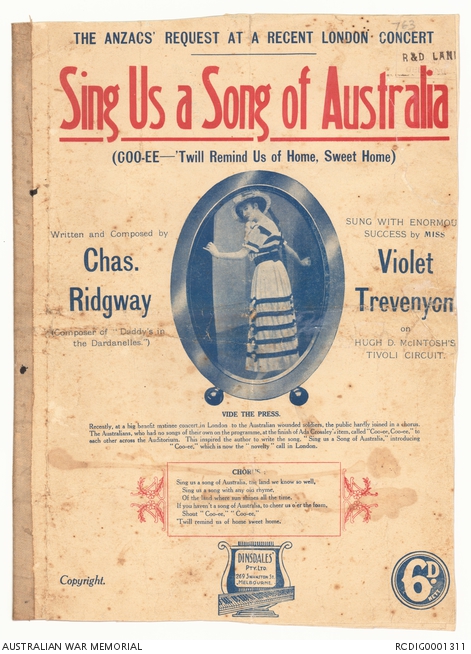 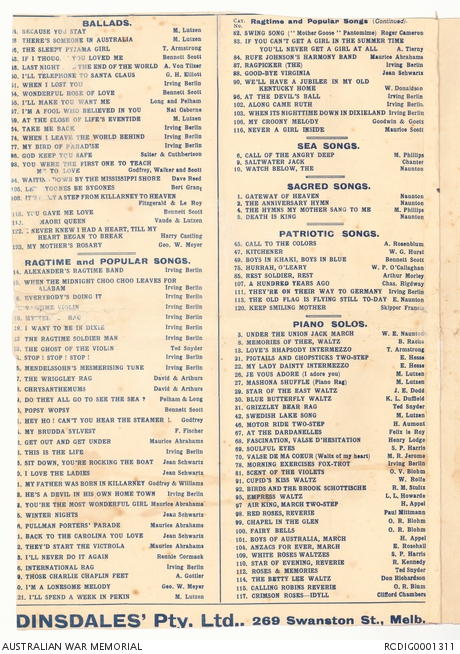 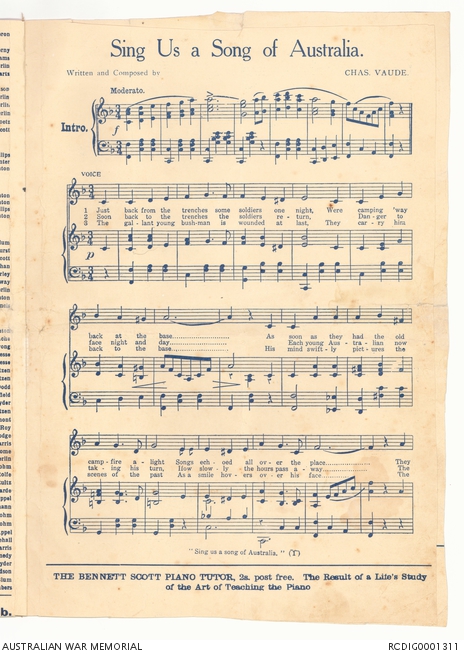 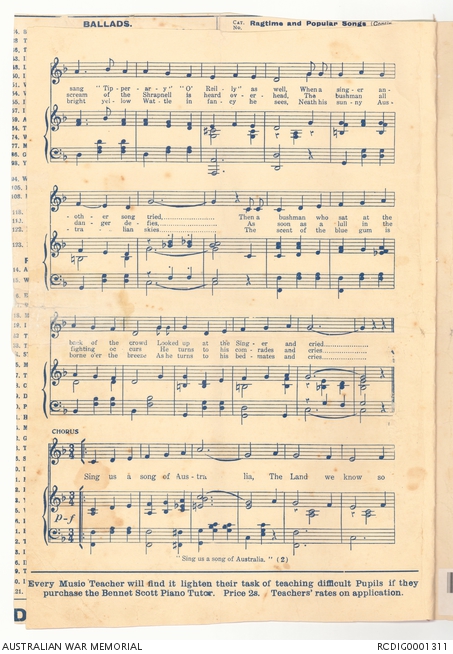 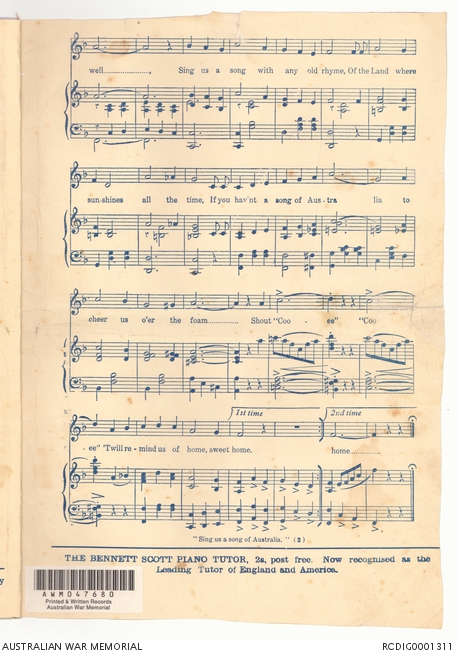 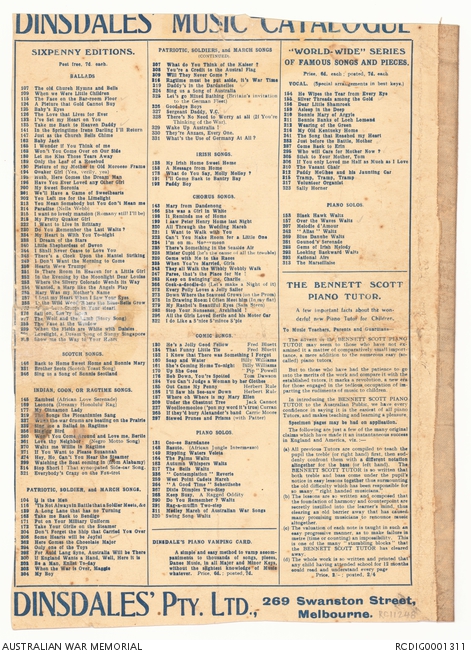 Sheet music for the song titled, 'Sing Us a Song of Australia', with music and lyrics composed by Charles Ridgway. This copy of the sheet music was published about 1916. The front cover features a photograph of American comedienne Violet Trevenyon, who popularised the song on the Tivoli entertainment circuit. Page 2 features a list of sheet music available from Melbourne-based publishers Dinsdales’ Pty. Ltd., revealing the range of musical styles of the period encompassing ballads, ragtime, popular songs, sea songs, sacred songs, patriotic songs and piano solos. On page 3, the name of Chas. Vaude appears as the lyricist and composer. Charles Vaude was actually the stage name of Charles Ridgway, a popular comedian of the period. The back cover features another list of items available from Dinsdales’ Pty. Ltd. such as sixpenny editions of ballads as well as patriotic, soldier and march songs. The retail price for this copy was 6d (six pence).

‘Sing Us a Song of Australia’ narrates the story of Australian soldiers in three different situations (camping at base, returning to the trenches and in hospital), demanding to hear a song about Australia that would remind them of home. The song was written by Charles Ridgway during the First World War after hearing a story about a benefit concert for wounded Australian soldiers in London. As explained on the front cover, the author was inspired to write the song in response to ‘The Australians, who had no songs of their own on the programme, at the finish of Ada Crossley’s item, called ‘Coo-ee, Coo-ee,’ to each other across the Auditorium.’

The concert in question appears to be one held at His Majesty’s Theatre in London on 19 November 1915, which was widely reported in the Australian newspapers several days later, albeit with a slightly different narrative. As reported by The Argus, ‘Miss Alice Crawford deeply stirred the audience by her recitation of Bracken’s ‘Old Bendigo’, the Australians rising and cheering the mention of familiar home names.’ As an encore, she gave the “Coo-ee”, and ‘A hush fell on the audience during the rendering of the verse describing the heroism of the fallen Australians at Gallipoli, while at the close a most remarkable scene took place, during which the refrain “Coo-ee” echoed and echoed in all parts of the house.’

This song was popular in Australia during the later years of the First World War. It featured at concerts for soldiers, peace celebrations, fundraising events and general social occasions. It was noted for being particularly popular in Victoria.
General social events during the war years often featured this song. It was performed by Mr. Edmunds at a concert and dance held during October 1918 to raise money for the Ballarat and Melbourne hospitals as well as the eye and ear hospital at Egerton in Victoria. The song also featured during a flour and sugar day held at St. Joseph's Home in Surrey Hills, Melbourne, on 3 September 1916. The purpose of the event was to present an amount of flour and sugar to the Sisters of St Joseph and 6 pounds. A musical afternoon followed where 'Sing us a song of Australia' was performed by Mr. H. Page. School students, Alice Mosley and Daisy Armistead, performed the song as a duet during a concert at the Boonah State School in Queensland during July 1917. The song also featured in professional shows such as the musical developed by Mr C. E. King titled 'Fun at the Bristol', at the Tivoli Theatre in Melbourne on 3 June 1916, where it was performed by Mr. Palmer.
Fundraising events supporting the war effort often featured ‘Sing us a song of Australia’ in musical programs. One of the earliest events of this type to feature the song was a 'Win-the-War' meeting held at Carisbrook, Victoria, on 24 February 1917. Many songs of the period were performed during this evening with a rendition of 'Sing a song of Australia' given by school children. The song was also performed by Mr. Peter Swannell at an event supporting the British Red Cross and Anzac Fund, held at the Methodist Church in Echuca, Victoria, during May 1917. Similarly, The Belgian Fund was the beneficiary of a fancy dress ball for children held at St. George's Hall in Donald on 4 June 1917, where the piece was described as an 'action song'. The song was also performed by Miss Marjorie Hawkins at a variety concert by The Musical Strollers at the Boulder Town Hall on 22 April 1918, organised to raise money for the Goldfields Patriotic Funds. Likewise, the Bairnsdale community hosted a concert in aid of the Australian Comforts Fund at the town's Theatre Royal on 26 June 1918, where the song was performed by Miss Hazel Mason.
'Sing us a song of Australia' also featured at events held to mark the cessation of the First World War and to welcome home troops. For example, the previously mentioned fundraising event at Egerton during October 1918, doubled as a farewell and welcome home for two local soldiers. Private Laurie Anderson was farewelled at the event on the occasion of joining the Australian Imperial Force whilst Driver Bert Roberts was welcomed home on leave. Miss Coates performed this song at a concert and dance held in the Kooweerup Hall on 27 November 1918. The event was the last in a series of events that day to commemorate the Armistice, and had begun with students accompanying soldiers to the local oval where a sports event was organised. Theo Gordon Tulk and Cecil Robert Pestell were both welcomed home at Wyrallah on 8 September 1919 by the Wyrallah Good Templars, where the song was performed by A. Kilgour and E. Eastment.
The song was performed for a short time after the war, with one of the final performances of this song noted by the Lismore Methodist Male Choral Society. The song was performed by Mr. Neil Ferguson, and resulted in an encore performance on Monday 5 July 1920. The final mention of this song in Australian newspapers is believed to date from an article written by the composer, Charlie Vaude, published in The Sporting Globe, Melbourne, on 11 November 1939. In this article, Vaude admitted he could not write music but added '…that very few trained musicians seem to compose catchy melodies, while so many hits have been composed by chaps who knew little about music.'
The song was also popular with Australian soldiers during the war with the lyrics discovered in a booklet titled 'Butler's Snowball Songbook', which was intended to raise money for the Trench Comforts Fund, and was connected to Lieutenant Colonel Charles Philip Butler. Inside the front cover, it is quoted 'For use at Camp Fire concerts arranged by Butler's 500 en route to France via South Australia'.