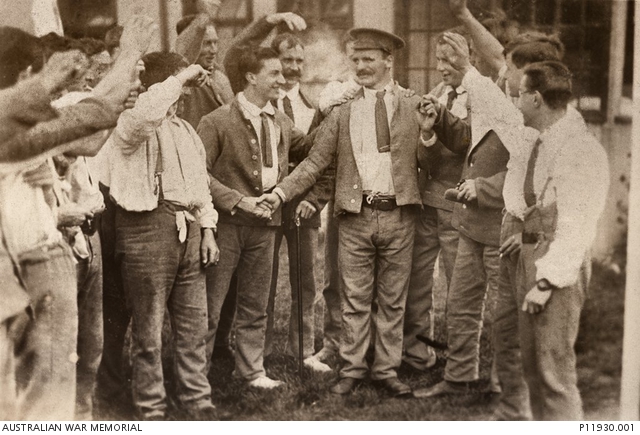 Informal outdoor portrait of 3970 Private (Pte) Martin O'Meara being congratulated by fellow hospital patients, all wearing 'hospital blues', following the announcement of his Victoria Cross award in the London Gazette on 9 September 1916. The award was given for "most conspicuous bravery" on 9 - 12 August 1916 at Pozieres. Pte O'Meara, a Forward Scout acting as stretcher bearer, repeatedly went into No Man's Land and brought in wounded officers and men under heavy artillery and machine gun fire, during four days of heavy fighting. He also volunteered and carried ammunition and bombs through heavy enemy fire to a portion of the trenches which was being heavily shelled at the time. Pte O'Meara suffered gun shot wounds to the abdomen during this action and was evacuated to England and admitted to Wandsworth Hospital on 19 August. He rejoined the 16th Battalion on 22nd December. Martin O'Meara VC was discharged on 30 November 1919 with the rank of Sergeant. Sergeant O'Meara was discharged on 30 November 1919. On return he was admitted to Stromness (a psychiatric facility for war veterans with psychiatric injuries), Claremont Asylum, then Lemnos Hospital and later transferred to Claremont Mental Hospital where he died on 20 December 1935. and lived the remainder of his life in a military hospital in Perth, Western Australia, where he died on 20 December 1935.