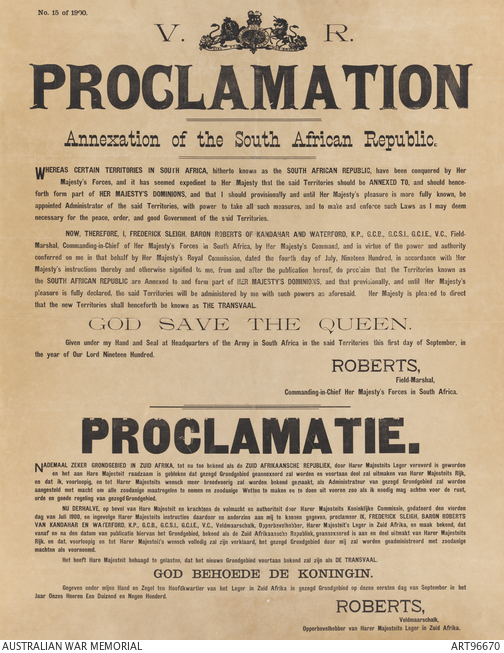 Official announcement poster (number 15 from the year 1900) from the Boer War in English and in Afrikaans, detailing that the territories known as the South African Republic were annexed to Britain and declared a part of the British dominions as of 1 September 1900. The poster also renames the South African republic as the Transvaal Colony, and states that Roberts is given power to take measures and make laws as he might 'deem necessary for the peace, order, and good government of the said Territories'.

This proclamation was issued prematurely, as according to international law, a conqueror may proceed to annex conquered territory only after the enemy has ceased to fight and peace has been formalised through an agreement. After this proclamation was released, Boer leaders within the annexed area refused to surrender, with the President of the South African Republic, Paul Kruger, issuing a counter proclamation on 3 September 1900. He declaired that Lord Roberts' proclamation was not valid according to international law and refused to submit to British rule. The result of this rejection was the third phase of the Boer War - the guerrilla conflict between British mounted troops and the Boer army.