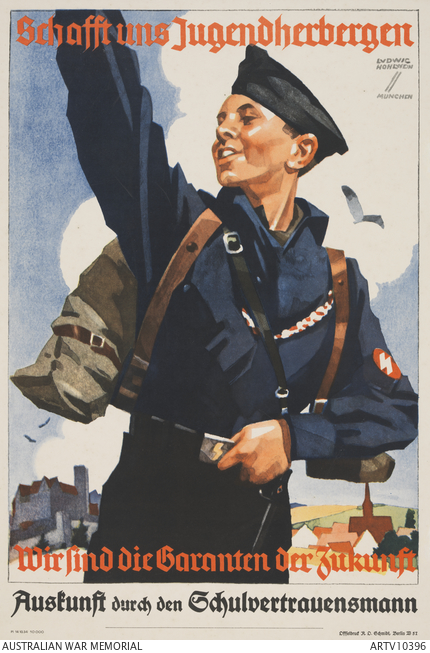 Depicts a boy, or a boy in his early teens, wearing a uniform associated with the Hitler Youth Movement. After 1933 the Nazi government took control of the armed forces as well as the whole of German society; ‘from cradle to grave a German man or woman would be part of a Nazi-controlled organisation’ [Fowler, E.W.W., Nazi insignia, Bison Group, London, 1992, p. 39]. There was the belief that the future of Nazi Germany was its children. The young man featured in Hohlwein’s poster, stands with his left arm proudly raised, wearing a knapsack, known as a tornister, the red and white lanyard, the belt buckle of a DJV ‘Pimf’ and the distinctive ‘S’ arm insignia of a Hitler Youth member. The symbolism of the arm raised in unification, ‘the so-called will of the nation’ became a powerful image in propaganda posters and political iconography of the time. The young man is placed before a bucolic country scene, possibly a reference to German nationhood, as well as the location in which the young boy undertook his cross-country hike, staying at a Youth Hostel (which is referred to in the poster’s title). The title is printed in red top and bottom left to right and translates as follows 'Create youth hostels for us! We are the guarantors of the future
Information via the school’s ombudsman'.