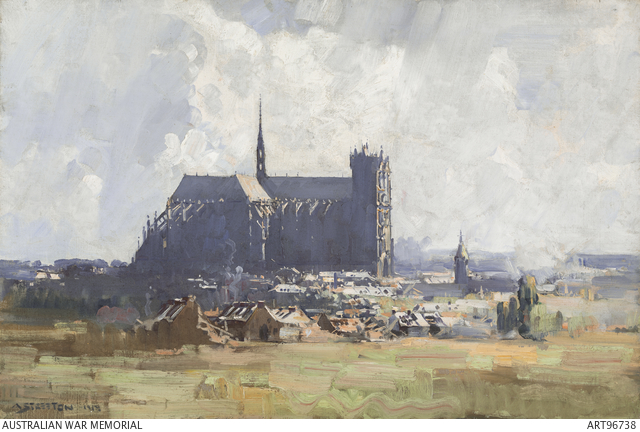 During the First World War Amiens was significant as an administration and communication centre at the crossroads of French rail and highway. The capture of this large, historic city became a principal objective for the Germans. From March to April 1918 they were driving towards the city, until the Australians' defence of Villers-Bretonneux prevented any further advance. Thereafter Amiens became a safe base for the allied forces. The town’s cathedral, with its ornate spire and towers, was visible across the surrounding countryside.

When the First World War broke out Arthur Streeton was living in London. Considered too old for military service, he joined the Royal Army Military Corps and worked as an orderly at the 3rd London General Hospital, Wandsorth, alongside other Australian artists, including Tom Roberts, A. Henry Fullwood and George Coates. Later discharged as medically unfit, Streeton lobbied for the establishment of an Australian war art scheme. He was appointed an official war artist in May 1918, and sent to France attached to the 2nd Division AIF. While in France, Streeton worked mainly around the Somme battlefields, looking to towns such as Amiens for material.