Outdoor group portrait of new recruits at Seymour camp. Many of the men are holding mugs and ... 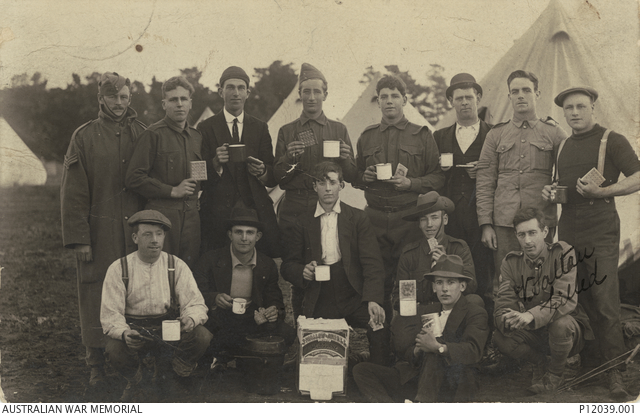 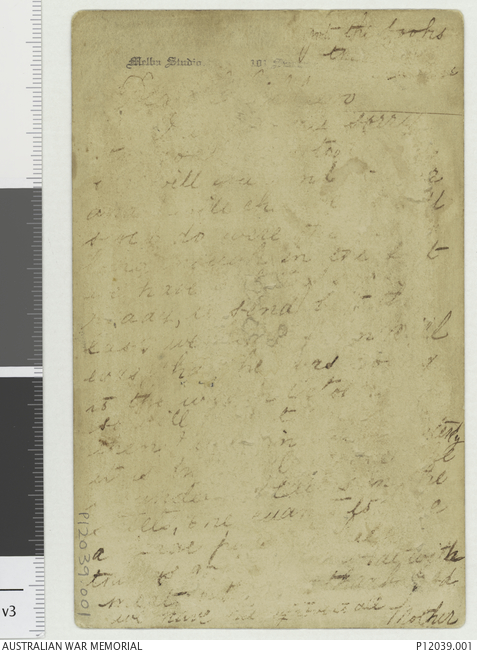 Outdoor group portrait of new recruits at Seymour camp. Many of the men are holding mugs and their Swallow and Ariell hardtack biscuits. The open biscuit box is on the ground in front of them. Identified are 390 Sergeant (Sgt) Robert Maxwell Finch (back row, second from right) and 393 Colour Sergeant Victor Leslie Saltau (front row far right). Both men are members of E Company, 5th Battalion and embarked from Melbourne on HMAT Orvieto on 21 October 1914. Sgt Finch, an electrician from Mordialloc, Victoria prior to enlistment, was wounded in action during the Gallipoli landing. Later promoted to Company Sergeant Major, he returned to Australia on 13 December 1914 suffering from enteric fever and was medically discharged. Following his recovery, he re-enlisted with the rank of Private and the service number 59013, although due to his medical condition, he was classified as fit for home service. Colour Sergeant Saltau was later promoted to Second Lieutenant and while serving at Gallipoli, was wounded in action. On 10 May 1915, aged 27, he succumbed to his wounds and was buried in the Lancashire Landing Cemetery, Gallipoli. His brother 115 Lance Corporal Brian John Saltau was killed in action in France.