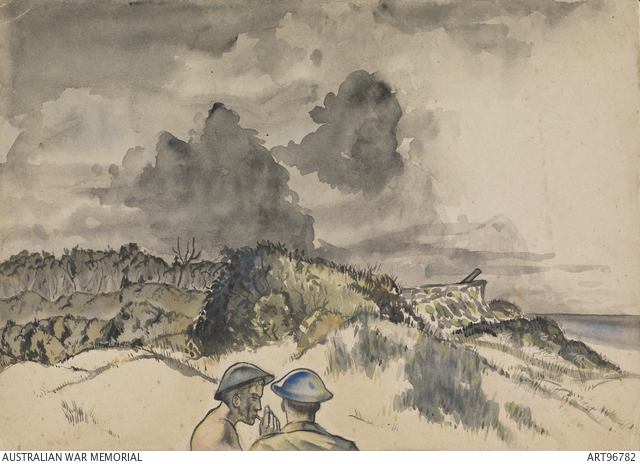 Depicts gun emplacements on Bribie Island, with soldiers wearing helmets , standing next to platforms with guns centrally located, facing the ocean. The gun is draped with camouflage and points out to sea. It is set in the dune landscape, close to the coast. During the Second World War, Bribie Island, off the coast of Queensland, was one of the primary defences for Brisbane and Moreton Bay. David Keith Robinson (b.1918) (NX110141) enlisted in the Australian Army in August 1942 and served as a Gunner with the “P” Australian Heavy Battery (Coast) AIF. This was a part of the Australian Army during the Second World War which included fixed coast, defence, artillery and searchlight units. He was stationed on Bribie Island between 1942-1944. The drawings and watercolours by David Keith Robinson reveal the day to day activities and installations he observed while stationed on Bribie Island. With an eye for detail, they skilfully capture a strong sense of the location, landscape and Army presence on the island, as well as a sense of the significance of the military operations undertaken on the island during the war.