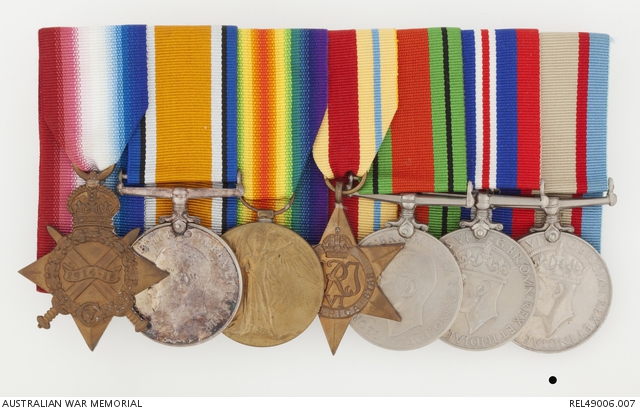 Medal associated with the Second World War service of WX8343 Private Trooper Charles 'Charlie' Burns. Twenty two indigenous soldiers are known to have served in the First and Second World Wars, and Burns is one of only a few of those who saw active overseas service in both world wars.

Burns was born on 21 September 1896. His parent’s names are unknown but he believed he was born on a cattle station near Wyndham, Western Australia. Aged six, Charlie moved from Wyndham to live with his new guardians Frederick and Grace Brockman in Guildford. There, he became the first indigenous student to attend Guilford Grammar School.

Just before his 19th birthday, Burns enlisted in the AIF in 1915. 1547 Trooper Burns embarked with reinforcements for the 10th Light Horse Regiment, but when he arrived in Egypt in November 1915 was briefly assigned the Australian Army Service Corps until he transferred to the 1st Signal Squadron in March 1916.

In September 1917, Burns rescued a New Zealand soldier, 11/1472 Trooper George Moffat of the Wellington Mounted Rifles, from drowning in the waters off the coast of Marakeb, Palestine. Moffat’s unit was in reserve at Marakeb, south west of Gaza, undertaking regimental training. One evening he was bathing in the sea when the strong current carried him out. Burns swam out to rescue him.

A citation was printed in the Desert Mounted Corps routine orders and reads “The Corps Commander directs that a record be made of the gallant conduct of 1547 Dvr Burns under the following conditions. No. 7/472 [sic – actually 11/1472] Tpr Moffat, NZMR Bde [New Zealand Mounted Rifles Brigade] was bathing in the evening of 11/9/17 when he was carried out to sea. Hearing his call, Burns swam to his assistance, and with great difficulty, after a life line had been broken, brought in Moffat, very exhausted. The current was very strong at the time, and another Trooper of this Bde, who went out at the same time as Burns, had to be assisted in gaining the shore.”

In August 1940, Burns was working as a slaughterman when he enlisted into the Second AIF to serve overseas. He was again sent to the Middle East, with the 3rd Railway Construction Company, where he served until January 1943. Returning to Australia he then served in Western Australia and Victoria until January 1945, including with the Catering Corps from 1944. A well known and well respected member of the community around Pemberton, Western Australia, Charlie Burns died in 1990 and is buried at Manjimup Cemetery.