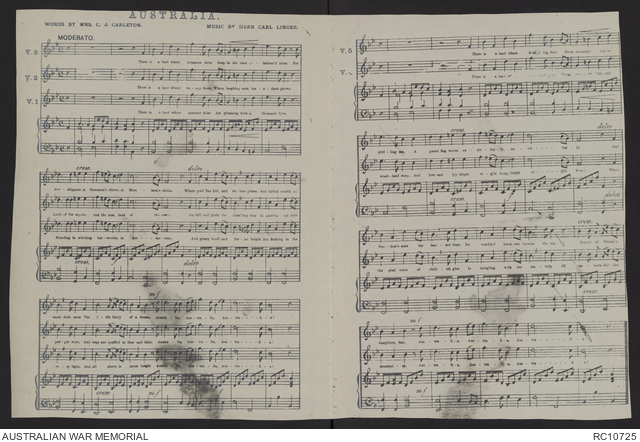 This piece of music titled 'Australia' is a handwritten photocopy of the song titled 'The Song of Australia', with lyrics written by Caroline Carleton and music composed by Carl Linger. This version features the melody line with piano accompaniment for the first three verses of the song on the first page, in reverse order, with the final two verses, also with melody lines and piano accompaniment, appearing on the second page. The handwritten musical notation appears to have been photocopied onto a sturdy type of paper.

'The Song of Australia' was the winning entry in a competition advertised by the Gawler Institute to award ten guineas for the words of a patriotic song titled 'The Song of Australia' on 1 October 1859. The competition drew 96 entries and was intended to mark the second anniversary of the organisation. The only stipulation given was that the composition was in 'accordance with the title and suitable for musical expression'. The prize was awarded to Mrs Caroline Carleton on 20 October 1859. The poem was published the following day, in entirety, together with a new competition – to find a pianoforte accompaniment to the poem. The stipulations were that the music was to be written in G clef without going 'below lower C or above upper G' and possessing a chorus written for three or four voices. The winner of this competition, Mr Carl Linger, was announced in the South Australian Register on 5 November 1859 after the decision was made the day before and the name of the winner was acquired after the newspaper sent a telegram to the Secretary of the Gawler Institute.

Four days after the announcement of the winning poem, an extensive opinion piece defending the choice of the judges was published in the South Australian Advertiser, on 24 October 1859, which included two parodies and encouraged people to compose a national anthem, as opposed to the requested patriotic song, or write a better song themselves.

Caroline Carleton, nee Baynes, was born at Islington, Middlesex, England on 6 October 1811 and was the daughter of bookseller William Baynes and Mary Ann nee Bailey. She married Charles James Carleton in 1836 and the couple, together with their two children, left England aboard the Prince Regent, and disembarked at Glenelg, South Australia on 26 September 1839. Their two young children died during this voyage. It was while living at the West Terrace Cemetery with her husband and five children, where her husband was working as superintendent of the cemetery, that Carleton wrote the song lyrics. A book of her poems titled 'South Australian lyrics' was published by J H Lewis in Adelaide during 1860. Her husband died on 20 July 1861, after two years of deteriorating health. During this period, Carleton had been doing most of the work as superintendent but her application to take over the position was rejected after his death. Carleton moved to teaching and opened several schools for girls in Adelaide before moving to Wallaroo where her daughter Amy had a school. She died at Kadina and was buried in the Wallaroo cemetery on 12 July 1874.

Carl Ferdinand August Linger was the composer of the music for 'The Song of Australia'. Linger was born on 15 March 1810 at Berlin, Germany, and was the son of an engraver. His parents encouraged his study of music and he became known for his musical compositions. He sailed from Hamburg, Germany, with his wife Wilhelmine and a group of intellectual Germans known as the Forty-Eighters, aboard the Princess Luise. A daughter was born during the voyage and the family disembarked at Port Adelaide on 7 August 1849. Linger was initially unable to find work in Adelaide as a music teacher and grew potatoes at Munno Para for eighteen months before he returned to Adelaide, alone. Three weeks later, after he found work as a piano tuner and noting music scores, his wife and daughter joined him in Adelaide. By 1852, he was living in a house on North Terrace and was teaching music to Adelaide’s most prestigious families. Some of his compositions had been published and he was active in most of the musical and choral societies in Adelaide at the time. He had also conducted Adelaide’s first Philharmonic Orchestra and helped establish a Liedertafel in the city. Linger died from dropsy on 16 February 1862 and was buried at West Terrace cemetery.

'The Song of Australia' was one of the first pieces to be played in the centre of Adelaide after the announcement for the order to partially mobilise South Australian troops for war. The police band assembled under Bandmaster Davey around 5pm at the intersection of Victoria Square and Flinders Street in Adelaide on Wednesday 5 August 1914, and played 'The Song of Australia', with many bystanders singing enthusiastically before the chorus 'swelled out in an unchecked roar'. The crowds here had originally gathered as a demonstration of public servants but the crowds grew to include citizens 'anxious to give expression to their feelings of patriotism'.

'The Song of Australia' was also a popular song performed at other social events during the First World War, including concerts by children and other members of the community. Students in grade 5 and 6 at Bellevue State School performed the song at a dance held at the Bellevue Mechanics Institute on Saturday 1 August 1914 and it was also performed by Kathleen Aldridge and Nellie Wilkinson at a concert to raise money for the Red Cross by the students of Invermay State School, Victoria. This was also one of the few events where the song was performed outside of South Australia, Western Australia and Tasmania during this period.

There were many other patriotic events in South Australia during the First World War where 'The Song of Australia', was also performed, with several of these events involving the participation of school children. 5th grade girls from Wallaroo performed this song during a demonstration involving 800 schoolchildren marching through the streets of Wallaroo behind the school band, the Mayor and prominent citizens of Wallaroo and Kadina towards the town hall for a patriotic meeting on Friday 21 August 1914. In Kapunda, the town organised a procession from the Kapunda Public School to Dutton Park that included the Kapunda Band, school children from local schools, local dignitaries and AIF volunteers on Wednesday 13 October 1915. This followed the renaming of the public holiday recognising the establishment of the eight hour day as 'Anzac Day' in South Australia. During the day’s proceedings, 'The Song of Australia' was sung, after the National Anthem, and was followed by cheers for the King and Australian soldiers.

There were several events organised during the First World War in South Australia, as in other states of Australia, recognising the service of men and women during the war. On Friday 26 May 1916, Empire Day was celebrated in the main room of the Narracoorte Public School with the students performing 'The song of Australia', before the unveiling of the school’s honour roll listing the seventy names of those who had attended the school and were now serving in the AIF. 'The Song of Australia' was one of the songs played by the Mitcham Camp Quartet under Mr H W Penn and sang by Miss Hilda Felstead at the 'Women’s Tribute Day' in Adelaide on Friday 27 April 1917. The day was intended to be a tribute to all men who had already enlisted and those who intended to do so. The women gathered at various points according to whether they were mothers, sisters, daughters or wives of soldiers and the procession followed Lady Galway in a car to the South African Soldiers’ Memorial on North Terrace which was where Lady Galway presented a short speech about solidarity. 'The Song of Australia' was also sung during patriotic Wattle Day celebrations in Gawler on Friday 24 August 1917 when 40 trees were planted by the relatives of those who had died in the war.

Farewell concerts and welcome home events for service personnel in South Australia during the First World War period predominantly featured this song. The song was sung at the end of an evening held to farewell five staff from Australasian Implement Company who enlisted in the AIF on Tuesday 15 September 1914, with three of these men identified as joining the 10th Battalion – Robert Stanley Bastard, Benjamin Bennet Leane and Joseph Waine. Similarly, it was the second song performed at the Semaphore Methodist Lecture Hall on Wednesday 27 January 1915 to farewell Archie Mutton, who served with the 1st Light Horse Brigade Machine Gun Section. As for welcome home events, 'The Song of Australia' was played by the Railways Band under Bandmaster W Thorne on Friday 28 July 1916, as the train carrying four officers, three nurses and 48 men on active service came into view at Adelaide Railway Station. In another interstate mention of a performance of the song, Neil Ferguson used it as an encore, following 'One of the Boys', during a welcome home reception for 80 returned soldiers at the Federal Hall, Lismore on Thursday 25 April 1918.

This song was also known by Australian soldiers on active service during the First World War with mentions in concert programs and other events involving those serving in the AIF. A special correspondent for The Advertiser in Adelaide, who was aboard one of the troopships in the first convoy, wrote that the band played 'The Song of Australia' when news came through about the Sydney Emden battle and reported that the song was sung with 'soul-stirring verve'. A concert program by the 13th Battalion Band also featured a performance of this song and was given as part of a dinner on SS Ulysses, 26 January 1915. A copy of the program was also collected by Sir John Monash and is included in 'Personal Files Book 1, 6 January - 31 January 1915'. A chorus comprised of men serving with B Section of the 4th Australian Field Ambulance also performed the song on Christmas Day 1916 as part of the day’s celebrations. Sir John Monash also collected a copy of the music and lyrics of this song during December 1915 and included this item in his personal papers from the First World War. Monash’s copy of the song is now located in 'Personal File Book 11, 1 December – 25 December 1915'.

Many years later, in 1977, a plebiscite was held in Australia to decide upon the question of 'national song for use on ceremonial occasions when it was necessary to mark a separate Australian identity'. This was in conjunction with 'God Save the Queen' continuing as the national anthem for use on regal and vice-regal occasions. The four songs included for consideration were the same as those that were included in a national opinion poll in 1974 - 'The Song of Australia', 'Waltzing Matilda', 'God Save the Queen' and 'Advance Australia Fair'. 'Advance Australia Fair' won the poll with 43.29% but was not announced as the national anthem until 1984.