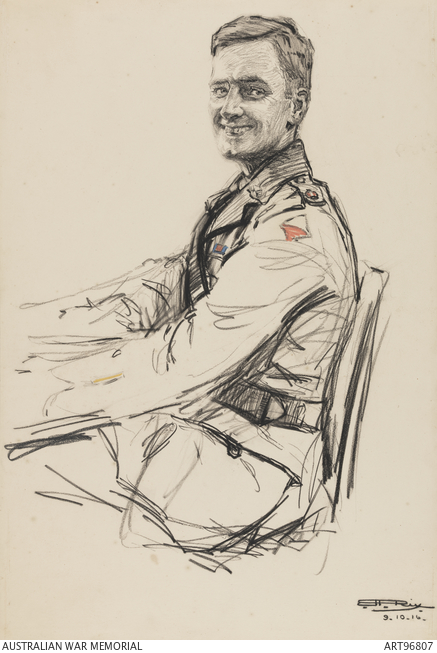 Rix Nicholas drew this portrait of her new husband two days after their wedding on 9 October 1916.

The eldest of six brothers, George or ‘Matson’ Nicholas (1887-1916) as he was known, was a school teacher before enlisting on 28 April 1915 and served on Gallipoli where he was wounded by shrapnel. On his recovery Matson re-joined his Battalion in France and won a Distinguished Service Order at Pozieres, single handedly capturing an enemy machine gun post. General Birdwood wrote to congratulate him; ‘Your action not only then, but on other occasions, has been beyond praise. And not only do I thank you most heartily for it, but feel proud at having such officers serving under me’. According to family legend Matson saw some of Hilda’s paintings in her abandoned studio while based in Etaples with his Battalion. On travelling to England on leave he tracked her down. Hilda and Matson were married on 7 October 1916 and honeymooned at Hindhead, Surrey. On returning to the Front Matson assumed command of the 24th Battalion and was killed in action at Flers on 14 November 1916.