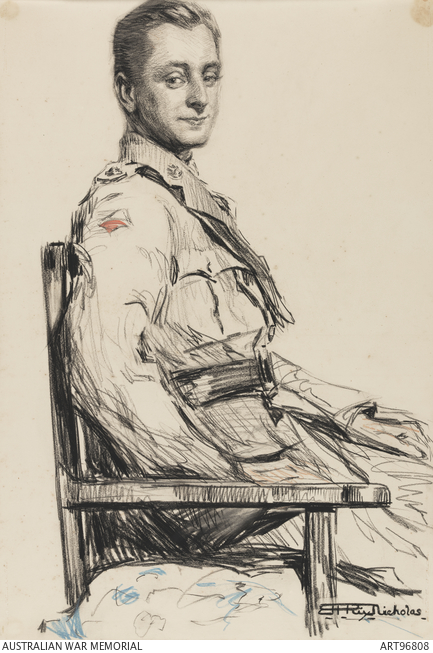 Bryon Fitzgerald Nicholas (1893–1917) enlisted at the same time as his older brother George Matson Nicholas. He left Australia as a trooper with the 13th Light Horse Regiment and also saw service on Gallipoli. By 1916 he had been transferred into the 24th Battalion and fought on the Western Front alongside his brother. Bryon was awarded the Military Cross at Bapaume in April 1917 and promoted to Lieutenant. In a letter of congratulations General Birdwood wrote of this action; ‘ I know that while in command of a forward post you pushed out and dug in two standing patrols under heavy machine-gun and rifle fire, which later on, under your control, were able to render very effectively assistance in repelling a German counter-attack’. On 9 October 1917 he was killed in action in an attack by the 24th Battalion on Daisy Wood near Broodseinde Ridge, Belgium. Bryon’s portrait is in the same medium and pose as that of Matson Nicholas (ART96807) with the colour patch of the 24th Battalion highlighted. It is a sensitively rendered study of a First World War soldier.