A Digger [Portrait of Tom Herket] 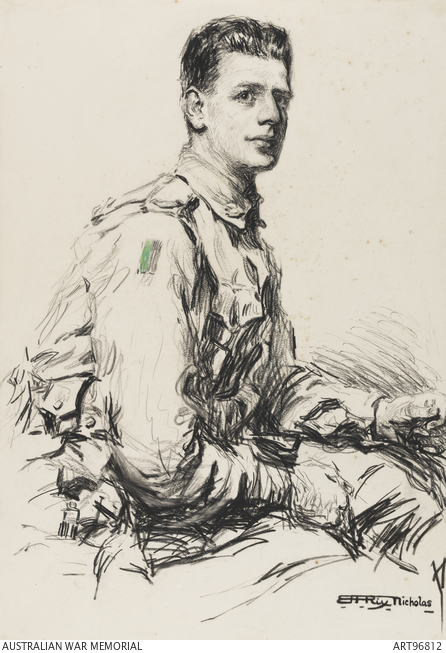 Hilda Rix Nicholas returned to Australia in 1918 and took a studio in Mosman, Sydney in 1919. She made drawings of soldiers who had returned from the war and were yet to find employment. During this period she consciously set out to create artworks expressing national sentiment around the loss of Australians during the war.

This portrait is thought to be of Private Thomas Henry Herket (1894 -1942) who enlisted in Sydney on 10 August 1915. By mid-1916 Herket was attached to the 53rd battalion serving on the Western Front in the battle of Fromelles. On 20 July 1916 he became one of the 5,533 casualties suffered by the 5th Australian Division. He was wounded and taken prisoner of war at Fleur Baix, Armentieres and interned in a German POW camp at Festings – Lazaretti. Herket underwent 10 operations on his wounded right ankle during his captivity. Following the war Herket worked as an accountant on several NSW pastoral properties before applying for work in 1939 with the Department of Treasury as an Agriculture agent for the Australian Government in New Guinea. Herket was one of more than 200 civilians killed in 1942 when the Montevideo Maru was torpedoed off the coast of the Philippines. He was 44 years old.