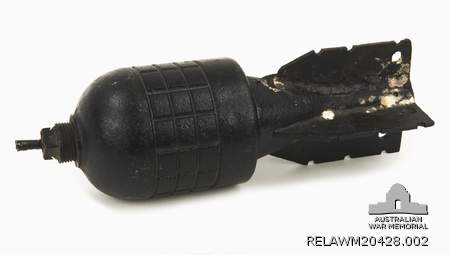 Home made cast mortar bomb which is essentially a round topped cylinder that has been painted black, with what appears to be a sump plug screwed into the nose, serving as a striker. The central part of the mortar body has been sectioned to mimic a real bomb. A four finned tail is screwed into the body of the bomb, with one fin that has been crudely re-welded. The fins also include lightening holes at the ends.

In the absence of suitable equipment for training purposes, members of the Volunteer Defence Corps (VDC) took it upon themselves to fashion their own examples of mortars, machine guns and grenades. Their efforts range from the crude and dangerous to the relatively sophisticated. The mortar (see RELAWM20428.001) and its 3 1/2 inch (90 mm) round were one of four designed and constructed in early 1942 by S73263 Warrant Officer Class 2 (WO II) Eldred Riggs of One Tree Hill in Gawler, South Australia, soon after he enlisted with "A" Company, 10 Battalion VDC. They were fabricated from bore casing with a reinforced breech end and a steel baseplate covered in canvas belting. The bombs were "cast locally" and weigh close to 3.4 kilograms each. WO Riggs made these mortars to fire, using blasting powder as a propellant; a firing mechanism from a flint lock gun and a pound (373g) of gelignite for an explosive charge, and maintained they could fire a round "1,000 yards (900m) using 20 oz (622g) blasting powder" which he later improved on, designing a 2.4 kg streamlined bomb which could be fired to "a range of 2,000 yards (1,800m) using 20 ozs (622g) blasting powder as propellant." Unsurprisingly, a number of accidents were recorded among VDC members using homemade weapons during the war.