Invisible sun (the other side) from the 'Anzac Centenary Print Portfolio' 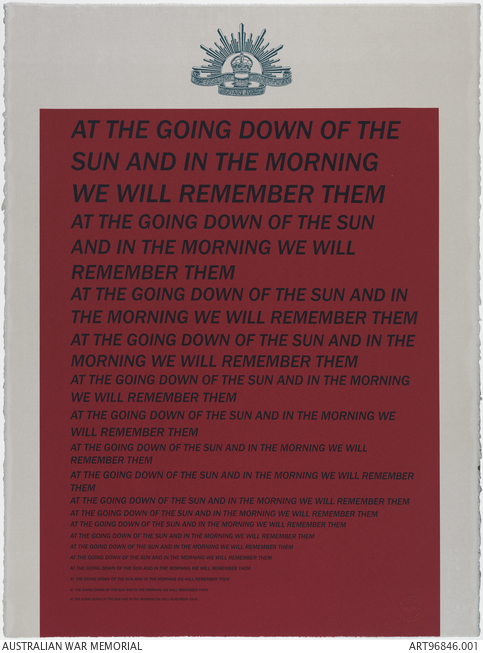 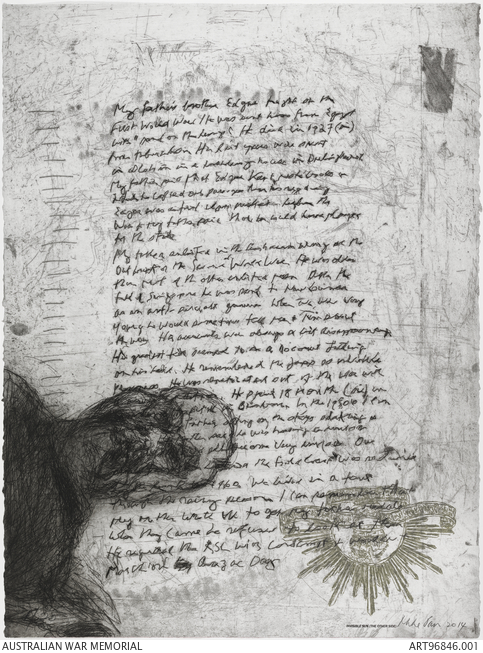 The dichotomy of how we remember war is the subject of Mike Parr’s work 'Invisible sun (the other side)', manifest in his creation of a double-sided print to represent the division of public and private memory.

“At the going down of the sun and in the morning we will remember them” is a refrain from the Ode of Remembrance, and is repeated in decreasing fonts on the front side of the print so that the text narrows towards a vanishing point at the bottom. Parr was interested in the function of formal and official public memory, a form that tends towards the universalisation and monumentalisation of traumatic events. The artist decided that the diminishing text of the refrain was a melancholic device as well as a reflection on the passage of memory through generations.

On the other side of the print Parr started with a portrait created from his own reflection in the highly polished surface of the blank plate. It is a gently anamorphic, generic Parr portrait image of his own father. The hand-etched text recounts the Parr family’s military history, specifically that of his uncle Edgar in the First World War and of his father in the Second World War. The text is deliberately almost illegible, reflecting the often opaque and convoluted nature of personal memory. The two sides of the print thus combine to present remembrance as a constant shift between the public and the private, the formalised and the almost forgotten.

The text reads:
“My father’s brother Edgar fought in the First World War. He was sent home from Egypt with “sand on the lungs”. He died in 1927 from tuberculosis. His last years were spent in isolation in a boarding house in Darlinghurst. My father said Edgar kept notebooks in which he copied out passages from his reading. Edgar was a first class cricketer before the War and my father said he could have played for the State.
My father enlisted in the Australian army at the outbreak of the Second World War. He was older than most of the other enlisted men. After the fall of Singapore he was sent to New Guinea as an anti-aircraft gunner. When we were very young he would sometimes tell me and Tim about the War. His accounts were always a bit disappointing. His greatest fear seemed to be a coconut falling on his head. He remembered the Japs as invisible presences.
He was repatriated out of the War with a nervous condition. He spent 18 months in Greenslopes Hospital in Brisbane. In the 1950s I can remember my father sitting on the steps shaking and crying. My mother said he was having a nervous breakdown. We all became very anxious. Our small farm behind the Gold Coast was reclaimed by the bank in 1960. We lived in a tent through the rainy season. I can remember that my mother wrote off to get my father’s medals. When they came he refused to look at them. He regarded the RSL with contempt and wouldn’t march on Anzac Day.”