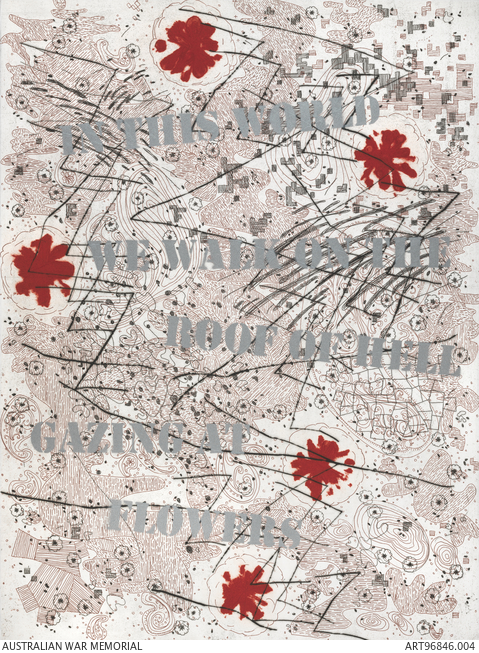 John Reynolds created a multi-layered etching in response to his extensive reading on New Zealand military history and Richard Flanagan’s then recently published novel The narrow road to the deep north. Reynolds was interested, in particular, in fictionalised accounts of military history and conflict rather than in direct historical accounts of theatres of war. This influenced Reynolds’s print to be more interpretive and formally driven than descriptive of a particular event or moment. For Reynolds “the human experience from 100 years ago is very unknowable”; later generations can never have a clear understanding of both the banalities and the terrors of the First World War in Australia.

Reynolds’s work often references his interest in semiotics, the science of signs, symbols, and how humans create and communicate meaning. Here he has chosen the serif font favoured by the military to present a haiku by Japanese poet Issa, quoted in Flanagan’s book:
“In this world
we walk on the roof of hell
gazing at flowers”
For Reynolds this haiku, stenciled over the print in silver spraypaint, reflects not only the hellish nature of war but also the human condition during it. The terrain of war beneath the haiku is made of a rich “kimono fabric” of camouflage and Ottoman motifs, red splashes, and violent zigzagged gashes. All of these motifs are intended to reference abstractly the geography of the hills, the trenches, and the bomb craters of the Gallipoli peninsula.

The camouflage used is based on the current Australian camouflage designs known colloquially as “love hearts and bunny ears” and “digicam”. The paisley forms and plants, Ottoman decorative motifs often used in rugs and textiles, represent the Turkish homeland. The black layer with the jagged lines gives a sense of violence done both on and to the landscape. The red bursts of colour are meant to evoke explosions, wounds, and poppies. According to the artist, these motifs are stylised and ambiguous representations of violence and suffering that convey his belief that it is difficult, if not impossible, to comprehend the magnitude of the First World War today.