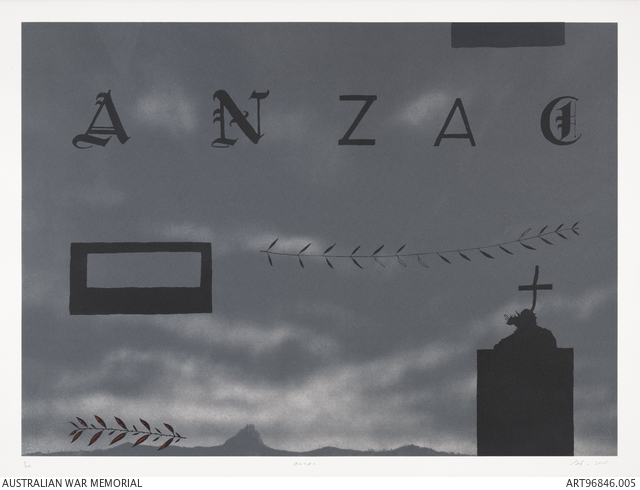 For his print, Shane Cotton drew upon his well-established visual vocabulary to emphasise “the importance of remembering: how we frame it”. Following a pattern set in previous projects, the print blends traditional and contemporary imagery and iconography, prompting the viewer to connect and consider the complex layering of histories, narrative, and myth.

The rich and velvety landscape upon which text and symbols float is based on a photograph Cotton had seen of the Gallipoli peninsula, with its geographical features exaggerated and fictionalised. It is a landscape devoid of human activity, a place where the action has already taken place; we are viewing it from the present. The pedestal surmounted by turf and a grave cross is another image inspired by a photograph from Gallipoli, and the artist intended to evoke a sense of displacement for the Australian and New Zealand soldiers who landed there. Cotton wanted the work to be simultaneously an image of contemplation and a meditation on remembrance:
“For me, it’s become a study in remembrance, and what it means to do it, and the process of doing it – that we can reflect on the narratives and the stories, and around the commemoration and what it means for us personally.”
The branches that float through the sky reference wreaths: in Maori culture a head wreath or pare kawakawa is a symbol of grief and mourning. Here they are nods to the grief both Australia and New Zealand shared during and after the First World War.

In much of Cotton’s work the skyscapes are starting points, places where histories can be imagined. Here the sky is a vast space that the word “Anzac” drifts across, and around which all the other forms fold in and float. The square to the left was inspired by Sidney Nolan’s Ned Kelly series, particularly the way in which Nolan used the iron mask both as a viewfinder into the landscape and as a device with which to frame it. It is not only a playful connection to Australian history and art history but also a means of showing how we frame what we see and how we want to see it. Both Ned Kelly and the Anzacs have become larger-than-life histories and exemplars of the “noble failure” so elevated within Australian and New Zealand identity.