At a place not stated from the 'Anzac Centenary Print Portfolio' 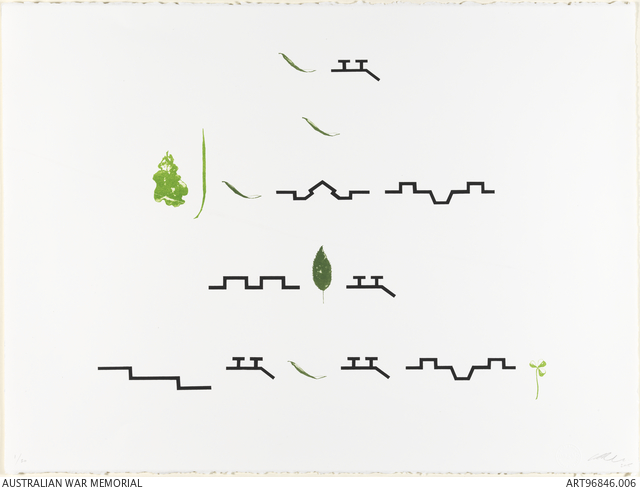 Sriwhana Spong has devised a private alphabet using abstracted trench designs drawn from First World War maps, along with facsimiles of leaves collected by the artist in Belgium. The idea for an alphabet, or code, emerged from the artist’s sense of her own inability to speak about the horror of war. This language of pictorial symbols plays on the “code” as a form of opaque communication and a tool for the dissemination of secrets.

The translated text appeared in an official letter sent to a soldier’s family, advising them of his death. Found by Spong at the In Flanders Fields Museum in Ypres, Belgium, it stated he had died “at a place not stated”. Brief and impersonal, these five words capture the tragedy, for both the deceased and their loved ones, of a person dying in a foreign land. Historian Ken Inglis describes the experience of family members “deprived of the traditional mourning rituals of their culture”, adding: “Their dead lay far away.”

The trench designs are, like code, a hidden structure; a subterranean architecture that speaks of the hardship endured by soldiers, while the fragile leaves document trees currently growing in soil enriched by the dead. Gathered by the artist while cycling along the Peace Route in Belgium, and then copied by hand on to a lithographic stone, the leaves are intended to represent a cyclical system of decomposition and recomposition; a rematerialisation into new forms of what has passed. The 45-kilometre route taken by Spong traces the Ypres Salient, an arch-shaped front line that enclosed Ypres on three sides during the First World War. Beginning in the town’s market square, Spong followed the trail to regions of strategic significance to the allies, such as Hill 60, and then on to military burial sites including the Polygon Wood Cemetery.

The solid, linear forms of the screen-printed trench designs are set in contrast to the delicate leaves hand-drawn by the artist onto two lithographic stones. The paper also holds the embossed memory of a crack that appeared in one of the large stones. Spong decided to keep working with the damaged matrix, interested in the fracture’s formal relationship to the underground trenches and excited by the materiality of the fine line reaching across the sheet like a scar.