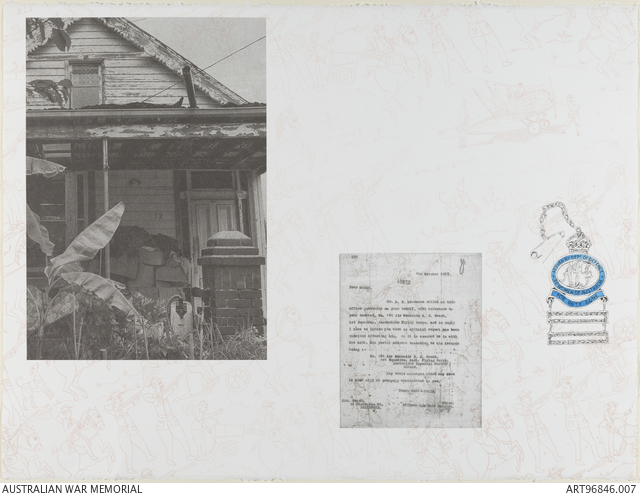 When creating her contribution to the portfolio Sangeeta Sandrasegar became interested in the relationship between archives and memory. Through her research into the First World War service records of her maternal relatives, and after reading W.G. Sebald’s The emigrants, she began to think about how memories often fictionalise the past and shape histories to fit our own contemporary needs. At the same time, as memory becomes ambiguous over time, we increasingly rely on archival documents to regain a semblance of that history.

The base layer of Sandrasegar’s work contains images that reference traditional Indian temple and palace wall paintings, a reference to her Indian ancestry. The scenes traditionally depicted Hindu and Ramayana stories or scenes from everyday life, but here they represent what Sandrasegar imagined to be the everyday experience of her relatives serving during the First World War.

The next layers represent the creation of the archival memory. Three documentary pieces relating to Sandrasegar’s great-great-uncle Reginald Geach are told through the perspective of his wife: a photograph of a house, the image of a letter sent to the house in 1918, and a sketch of a badge. The house to which the letter was sent happens to be near where Sandrasegar lives in Melbourne, and she passes it most days. The letter is a copy of one found in Geach’s service records. It is from the military records office replying to his wife’s enquiries into his whereabouts, as she had not heard from him for some time. The badge is a Female Relatives’ Badge issued in Australia to the wife and/or mother of those on active service overseas during the First World War. Women back home were left to deal with the consequences of war, the loss of a loved one, or simply the strain of waiting and uncertainty.

These documentary pieces were a means for Sandrasegar to connect to a part of her family history that was previously unknown to her. The work as a whole points to the role of women on the home front as well as the archival connections to history and the sometimes shadowy presence of memory.