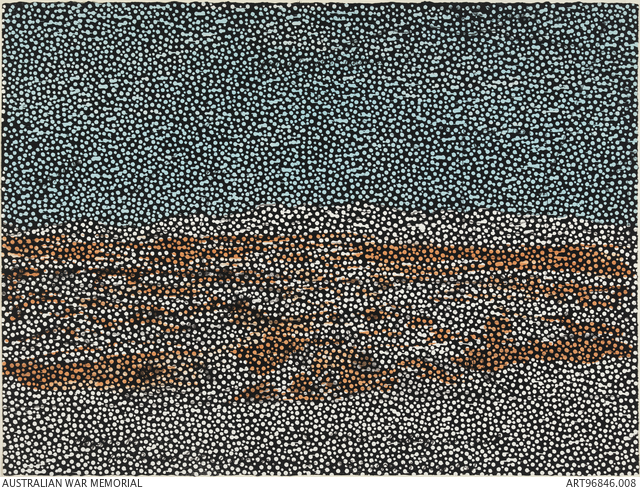 Daniel Boyd’s print for the Anzac Centenary Print Portfolio has a direct relationship to his other work in that it adopts a strategy of first appropriating historical images and then overlaying them with dots (what he calls “lenses”) to re-interpret that history. Before beginning his residency for the print portfolio, Boyd contacted his mother to learn more of his family’s military connections. He discovered a number of his relatives had served in the First World War, one being his greatgrandfather William “Bert” Brown.

Boyd spent his first few days at the Memorial researching his relatives, learning of their service and travel, and trying to glean from these records a sense of their experience. Brown had enlisted from the Barambah–Cherbourg Mission in July 1917 at the age of 18, and was sent to Egypt the following January to join the 11th Australian Light Horse Regiment. The regiment had more than 30 Aboriginal and Torres Strait Islander members, the most of any unit in the Australian Imperial Force. By touching upon the story of his great-grandfather, Boyd sought to re-articulate and have audiences engage with the history and representation of Indigenous Australians in the First World War.

Through his research at the Memorial Boyd also discovered the drawings of Otho Hewett, who had sketched many of the battlefields and places in which the 11th Light Horse had served. Through these sketches Boyd was able to see the places his great-grandfather had traversed, gaining a sense of how the landscape had looked at the time and what Brown may have experienced.

In his print Boyd has re-appropriated one of Hewett’s panoramic drawings of Magdhaba to trace his own visual history back to his great-grandfather through landscape and place. Over the Hewett image Boyd then layered a black woodcut of dots to alter how the work beneath is viewed from different angles and distances. These “lenses” create small viewing apertures onto the scene below, and are intended to imply that our view of history is only ever partial, selective, and increasingly coloured and obscured by memory. Furthermore, as the dots are reminiscent of the visual language and composition of Western Desert painting, Boyd provides a specifically Aboriginal perspective of the First World War.