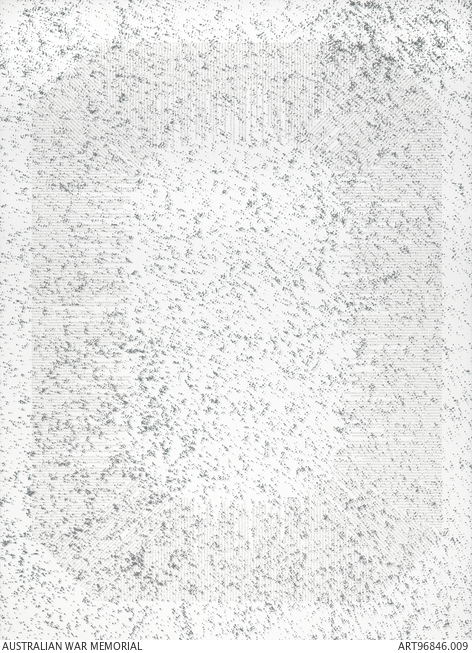 In approaching her commission Helen Johnson grappled with the idea of commemoration in a contemporary context, and the distance she felt from a war that was not part of her family’s lived experience. She began searching through the Australian War Memorial’s online archives for different images related to the First World War, but felt uncomfortable focusing on a specific person or narrative. After weeks of looking at a broad range of material, she reflected on the search history in her web browser as a subjective path she had taken through this vast and complex subject. Employed as a framing device for her response to commemoration, it became the subject of her print. For Johnson, “any form of commemoration is a framing – engaging with a memory of an event or a set of memories”. She added that she was interested in the idea of the print “acknowledging itself as a frame”.

Johnson copied her search history into a document, manipulating it to create a literal frame within the four edges of the paper. The text is small and on the verge of illegibility, its content emerging only when studied closely. The interference ink in which it has been printed contains pearlescent pigments that shift between violet and green when viewed from different angles. Johnson saw this as a way of acknowledging that, from her perspective, there is no fixed statement being made in this work about what the First World War was, or means to us now, or how it should be viewed or commemorated.

The frame is printed over two layers of small grey spheres that appear to vibrate across the surface of the paper. The drop-shadow created by these offset layers produces an intense visual push and pull between text and background. An analogy is drawn between the difficulty of training one’s eye on the unfixed details of the print and the often complex and at times irreconcilable nature of the subject.