Bury my 'patu' from the 'Anzac Centenary Print Portfolio' 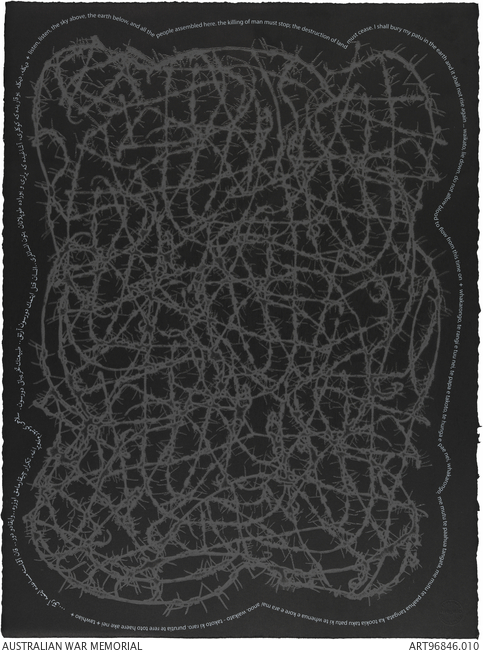 In the Australian War Memorial’s First World War Galleries, Brett Graham encountered a knot of Turkish barbed wire from Johnston’s Jolly (Kirmezi Sirt) on Gallipoli. Cut to pieces by rifle, machinegun, and shell-fire, the stiffly woven wire is a tactile memory of the campaign and a metaphor for adversity. Deeply etched into a zinc plate, a repeated image of the wire has been printed in dark graphite ink over a black background that reveals the wood-grain of a plywood sheet. For Graham the barbed wire represents a dual history: that of a battle on foreign soil, as well as the experience of his Maori ancestors who were interned in New Zealand when they refused to go to war.

In all, 2,688 Maori and 346 Pacific Islanders served with New Zealand forces during the First World War. While the government had initially taken its lead from the British and decreed that no Maori would serve, Maori politicians belonging to the loyalist tribes insisted that the price of citizenship was that these people should fight. A Maori contingent arrived on Gallipoli five weeks after the first landing, among them the prominent leader and politician Te Rangi Hiroa (Sir Peter Henry Buck). This was the first major conflict where the Maori population had served as part of New Zealand’s army.

While on his mother’s side Graham traces a European lineage and relatives who fought in the First World War, his father’s side connects him to the history of the Waikato people from the North Island of New Zealand. When the numbers of Maori sent to the front slowed dramatically, and those traditional areas that supported the war movement no longer had the men to send, there was a strong push for Maori from Waikato and Taranaki to enlist. Their refusal led to a government-imposed conscription, and when balloted in 1918 the men from Waikato who had not reported for training were imprisoned.

The text, screenprinted around the barbed wire in English, Maori, and Ottoman Turkish, is taken from the words of King Tawhiao, quoted by his granddaughter, Waikato leader Te Puea Herangi, in resistance to New Zealand’s participation in the First World War:
“Listen, listen, the sky above, the earth below, and all the peopleassembled here. The killing of men must stop; the destruction of land must stop. I shall bury my patu in the earth and it shall not rise again … Waikato, lie down. Do not allow blood to flow from this time on.”