Elevation of the senses 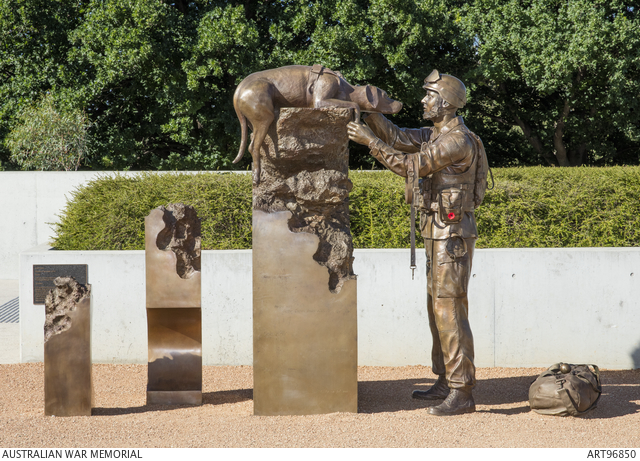 This sculpture commemorates the vital role and contribution of Explosive Detection Dogs and their handlers in war. The tunnel through the base of the sculpture alludes to the rigorous training undertaken by the dogs, while the rocky outcrops atop the columns represent the foreign landscapes to which the dogs and their handlers are deployed. The elevation of the dog on the central column, where it crouches eye-to-eye with its handler, highlights the deep bonds that are forged between the two, as well as the mutual dependence on which their work is based. The configuration of the columns refers to the agility and obstacle courses undertaken by the dogs, as part of their training. Within the main column is a hidden cache of weapons, visible only from the back of the sculpture in order to illustrate the danger of buried IEDs or hidden weapons that only the dogs can find with their heightened sense of smell. Sitting in the bag, which forms the smallest component of the sculpture, is a tennis ball. The tennis ball is an integral part of the dog’s training, as well as a valuable reward when the animal has located explosives. Ewen Coates (1965- ) is a Melbourne based sculptor and painter. He has held a number of solo exhibitions and has participated in group exhibitions at the National Gallery of Australia, Tokyo Metropolitan Museum of Modern Art and Heide Museum of Modern Art. Coates has been a finalist in the Melbourne Sculpture Prize, Mt Buller Sculpture Award, McClelland Sculpture Survey and Award, Deakin University Contemporary Small Sculpture Prize and Lorne Sculpture Festival. Until recently he owned and operated a sculpture foundry and has been involved in numerous major public sculpture commissions around Australia.