The Australian area at Nunhead Cemetery. The grave in the centre front is 27 Lance Corporal Eric ... 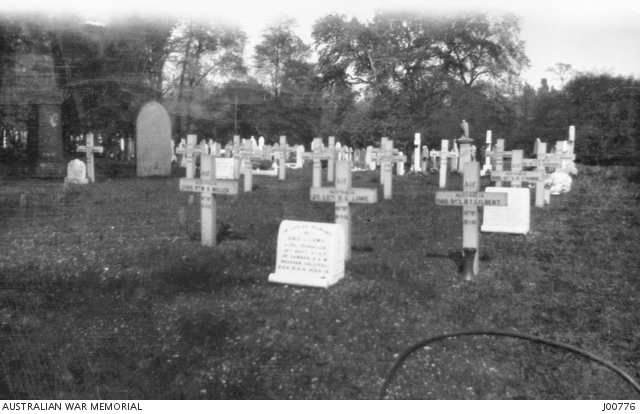 The Australian area at Nunhead Cemetery. The grave in the centre front is 27 Lance Corporal Eric Lyndon Lowe, 18th Battalion, from Clarence Town NSW, who died on 10 September 1915 aged 18 years. The grave to the right is 1560 Private (Pte) Leslie Raymond Talbot Gilbert, 14th Battalion, born in England, from Kogarah West NSW, who died on 20 January 1916 aged 19 years. The grave 2nd row right side is 1019 Sergeant (Sgt) Victor Ronald Coombe, 15th Battalion, of Campbelltown, Tas, who died on 29 September 1915 aged 26 years. From the collection of Mr Alfred Thomas Sharp. Mr Sharp was the Commonwealth Immigration Officer of Victoria and was based in the London Office during the First World War. He and his wife hosted and visited many soldiers, particularly those from Victoria, who were recuperating in London. He also photographed many Australian graves in English cemeteries. His photograph collection relating to this period in London was bequeathed to the Memorial in 1922 after his death. During his time in London he was a member of the British Volunteer Regiment, serving with the Willesden Battalion, Middlesex Volunteer Regiment.