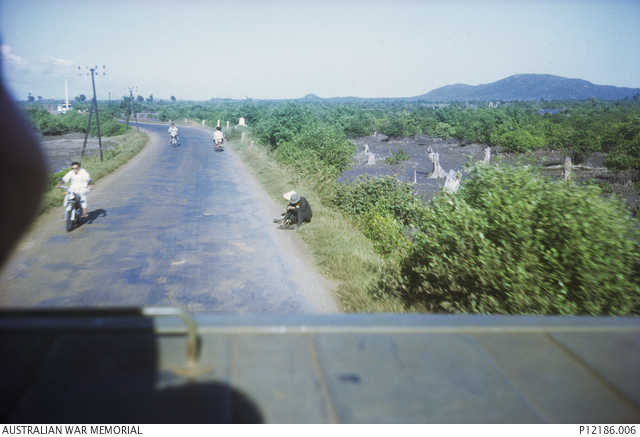 A mud crab seller on the road to Vung Tau, Vietnam. One of 477 colour 35mm transparencies taken or collected by 2784336 Signalman Stuart Lindsay Weller, 104 Signal Squadron, relating to his service in Vietnam between 1967 and 1968. Weller writes: "We're on our way back from Vung Tau and I was standing up the front of the truck tray resting my arms on the cab taking photographs as often as I could. The subject of the photograph was the man dressed in black in the right middle of the photograph. ... He was selling mud crabs on the side of the road and what he’d obviously done was wade out into the tidal flats behind him during low tide, caught some crabs, tied them up and then squatted on the side of the road with the crabs on the ground in front of him. His intent was to sell the mud crabs to the passing locals ... He had no expensive overheads (like a stall) and it was 100% profit - provided he didn't get hit by a truck!"