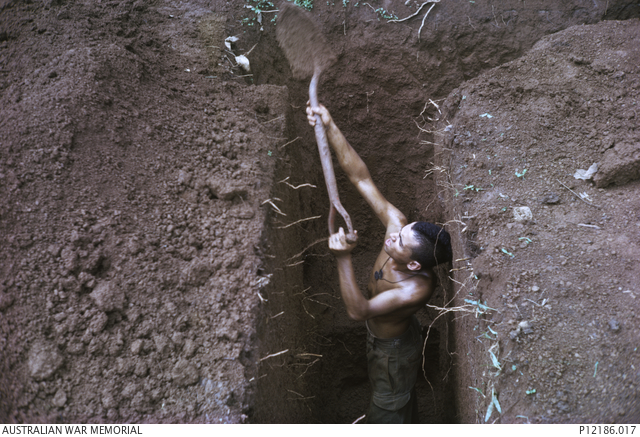 3788799 Signalman Hilton Patrick Dejong cleaning out a newly dug rifle pit. One of 477 colour 35mm transparencies taken or collected by 2784336 Signalman (Sig) Stuart Lindsay Weller, 104 Signal Squadron, relating to his service in Vietnam between 1967 and 1968. Sig Weller notes: "It was decided soon after 104 Signal Squadron replaced 103 Signal Squadron in May, 1967 that new machine gun bunkers and rifle pits needed to be dug down on our front wire facing Kangaroo Pad. Thankfully, the unit was able to get the use of a digger - a motorised rotating bucket arrangement - that dug the required deep trenches quickly. The old rifle pits had just been a lateral pit deep enough to give the occupants cover if the base was mortared and for the front edge to be at a comfortable firing height. The new machine-dug pits were in the shape of a 'U' with the two arms facing the front wire. These two arms were nearly two metres deep and would become bunkers while the base of the 'U' would be the new rifle pit ... The first task was to clean out the newly dug pits with shovels. The next task was to build a wooden frame to drop into both side pits. A metal sheet was then dropped on top of the frame and soil shovelled on top of that: these became the two side bunkers. Next, a small sandbag wall – four or five bags high – was erected behind the rifle pit and all the excess soil placed behind it: this then became a protective wall for the men in the pit from any fire than might come from deeper in the unit lines."