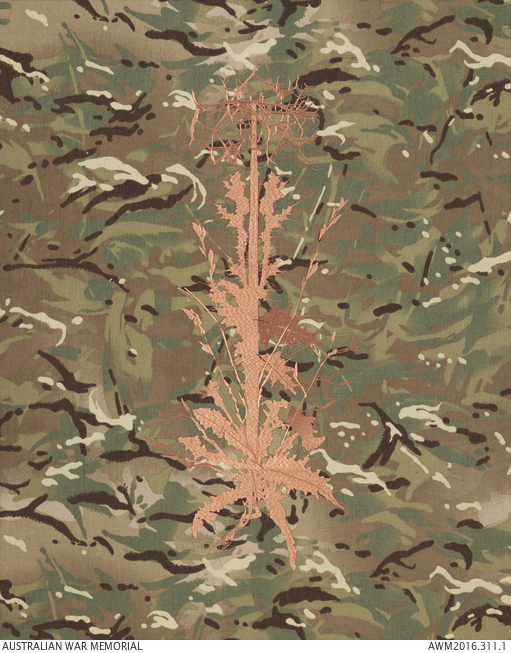 In October 2011 Ben Quilty became the fourth official war artist commissioned to cover the conflict in Afghanistan. He was attached to the Australian Defence Force (ADF) observing their activities in Kabul, Kandahar and Tarin Kot. In Afghanistan Quilty gathered a small collection of weeds from Diesel Farm Road in Camp Holland, the Multi National Base at Tarin Kot, for his friend, artist Caroline Rothwell. With no botanical knowledge Quilty was unsure of which plants were weeds or not. It seemed to him that those most likely to be weeds were the ones that had started sprouting up in the ditches along the edge of the main road through Camp Holland: the plants which were regenerating fastest in soil exposed due to ADF activities. Once back in Australia these plants were used by Caroline Rothwell as source material for a new art work.

This work is from Rothwell's 2014 series of Urpflanze street plants exhibited at the Santos Museum of Economic Botany, Adelaide Botanic Gardens, as part of the Adelaide Biennale of Art "Dark Heart". The title and form of Rothwell’s street plant series is borrowed from the German writer and poet Goethe (1749-1832). Goethe also worked as a natural scientist and his interest in plant morphology led to a quest to record an archetypical plant, the Urpflanze. Collectively this series presents for the viewer a new breed of surreal ‘uberweeds’ that are the imagined survivors of their species thriving in our urban environments in the wake of colonisation and conflict. They are at once familiar and sinister.

In this series Rothwell recreates or ‘draws’ in embroidery each street plant onto camouflaged backgrounds, with each camouflage pattern providing the geo-political context for the place of collection. So for "Urpflanze street plant #6" (Tarin Kot, Camp Holland, Diesel Farm Road, Afghanistan, collected by Ben Quilty, 28.10.2011) the artist has chosen Multi-Terrain Pattern (MTP) as the background. The latest camouflage to be worn by Australian Soldiers in Afghanistan.

Military camouflage imitates the local environment, taking its cues in both colour and shape from the botanical context of its use. In 2010 the ADF announced that Multicam would be the standard for all regular Australian Army personnel in Afghanistan. It ‘provided troops with greater levels of concealment across the range of terrains in Afghanistan – urban, desert and green’. Before its introduction soldiers had to change between green and desert coloured Australian Disruptive Pattern Camouflage Uniforms (DCPU) or AUSCAM depending on the locale and environment of operation.

‘By choosing to use camouflage (a word that’s usage originated during World War One) Rothwell alludes to the rarely considered colonisation of the natural world that occurs during war. By choosing to preserve ‘weeds’, commonly defined as plants that are out of place, she also alludes to the territorial intrusion that occurs during war.’ [Lisa Slade, Project curator, Adelaide Biennale of Art, Art Gallery of South Australia exhibition catalogue]