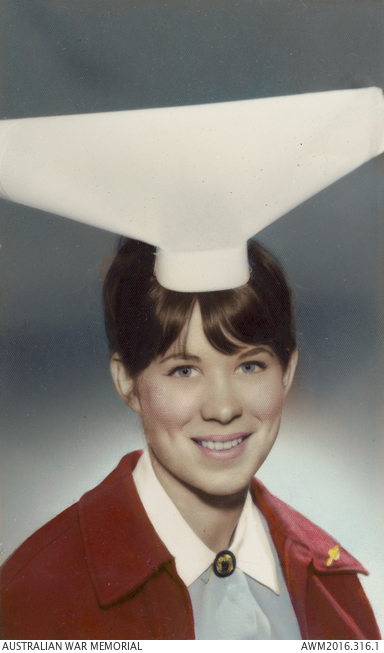 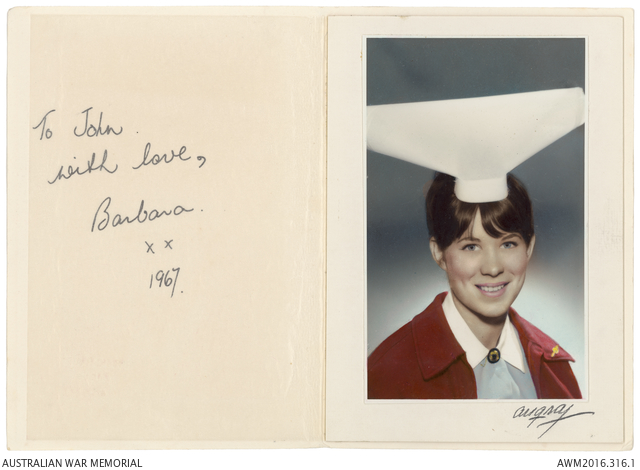 Studio portrait of Miss Barbara Frances Black wearing the nurses’ uniform of the Heidelberg Repatriation Hospital in Melbourne where she did her training. Miss Black was born in Sydney on 19 March 1946 and after completing her training she joined the Royal Australian Army Nursing Corps (RAANC) where she served as F35135 Lieutenant (Lt) Barbara Frances Black. Lt Black was a member of the second contingent of RAANC sisters posted to 1 Australian Field Hospital at Vung Tau where she served from 1968 to 1969. During her tour in Vietnam she was diagnosed with Leukaemia, which at that time was untreatable. She was not told of her diagnosis but on return to Australia after her tour of duty in Vietnam she was advised to seek medical advice. After returning to Australia she fell pregnant. Realising the likely outcome of her illness, she discovered that benefits in the Veterans’ Entitlement Act that might be available to her child after her death were not the same as for male veterans. Even though she was very sick, and under treatment, she lobbied the Commonwealth Government and the Act was amended. Barbara Black died on 3 November 1971, not long after the birth of her daughter, and is buried in the Burwood Cemetery in Melbourne.