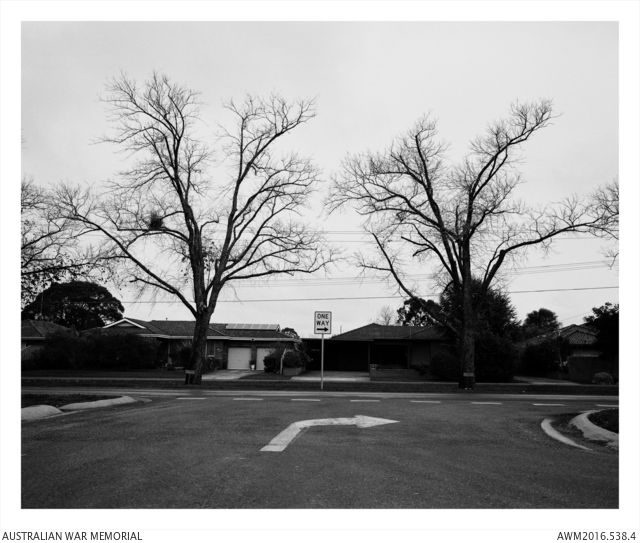 Photograph of the tree planted on the Avenue of Honour, Ballarat, Victoria, in recognition of the service of 616 Private Arthur Treve Marsh, 14th Battalion. This photograph is from a series of 22 images taken by Trent Parke titled WW1 Avenue of Honour.

Artist's original caption: Private Arthur Treve Marsh 616
14th Battalion A.I.F.
Enlisted: Aged 21 years and 11 months: 1st October 1914 (W. August 21st 1915. Unofficial K)
“I was a personal friend of his. I was in the same company as he when we first joined up, and we were together all through till unfortunately he met his end. He left with us in charge on August 21st. During the charge whilst taking cover we were lying down and someone spoke to me and that someone was Trevor, or as we called him ‘Lizzie.’ While considering whether we ought to push on or not, an enemy bullet went through a chap by the name of Coleman (but am not sure of the name) If name correct he was marked missing after the charge. The bullet went through both his feet, grazed my ear and entered his (Trevor’s) brains. I turned to him and said ‘Are you hit’. The only reply was a muffled groan. I looked to him and could see that his brains were shot out. After the incident we advanced and the charge being a success, that was the last I saw of poor Trevor. With reference to the burial, I know nothing, but for days after the rifle fire and machine fire was awful on that particular spot. We afterwards moved to the right and another lot took over from us. A mate of mine, also Trevor’s wrote to his people after I told him. Trevor had met his end, and received letters in return, but have never read them myself. Saw a photo of his also and account of his death in a Ballarat paper some time ago.”
Reference:- Rogers, Pte L.J.B.
Headquarters Coy. 46th Battn, 12th Bgde. A.I.F.
London 29.8.16/Australian War Memorial Archives
03/11/15: Posted as Wounded & Missing at D’Nelles
06/04/16: Previously reported Wounded and Missing, now reported
Killed in Action at D’Nelles on 21st August 1915
Casualty form active service/National Archives of Australia