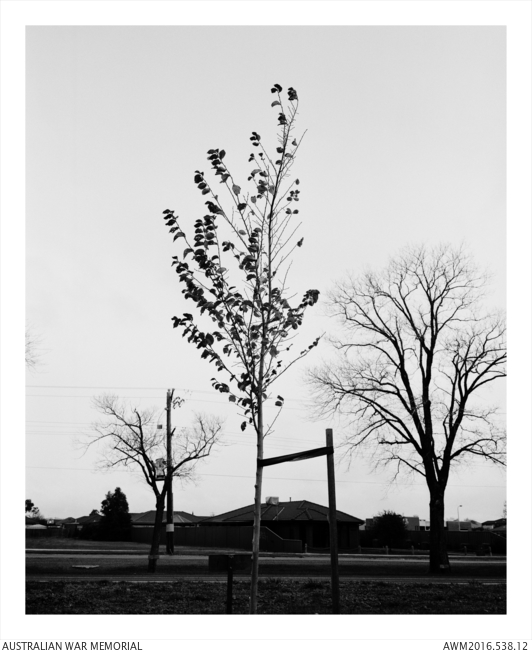 Photograph of the tree planted on the Avenue of Honour, Ballarat, Victoria, in recognition of the service of 1358 Lance Corporal George Reginald Mounsey, 5th Battalion. This photograph is from a series of 22 images taken by Trent Parke titled WW1 Avenue of Honour.

Artists original caption: Lance Cpl George Reginald Mounsey 1358
5th Battalion A.I.F.
Enlisted: 16 years and 11 months: 9th November 1914 (Died of Wounds, 9th May 1915)
“Dear Sir, My brother was born on 18th December 1897. He put his age up and enlisted before he turned 18. He served with 5th Batt. After arriving in Egypt stayed a fortnight there. Volunteers were called for.
He hopped in and went over to Gallipoli and served with 7th Batt. He was killed there (wounded) on May 17 and died of wounds 2 days later on the hospital ship and was buried at sea. My mother asked for his name to be left in 5th Battalion for inclusion in the National War Memorial.”
Excerpt of letter dated 3-10-67 from from Mrs R.Macdonald addressed to Central Army Records Office: National Archives of Australia
09.05.15: Admitted: Gun Shot Wound, Chest, Serious: Dardanelles 09.05.15: Died of Wounds on board HS ‘Braemar Castle’, Buried at sea
Excerpt from Casualty form Active Service, National Archives of Australia