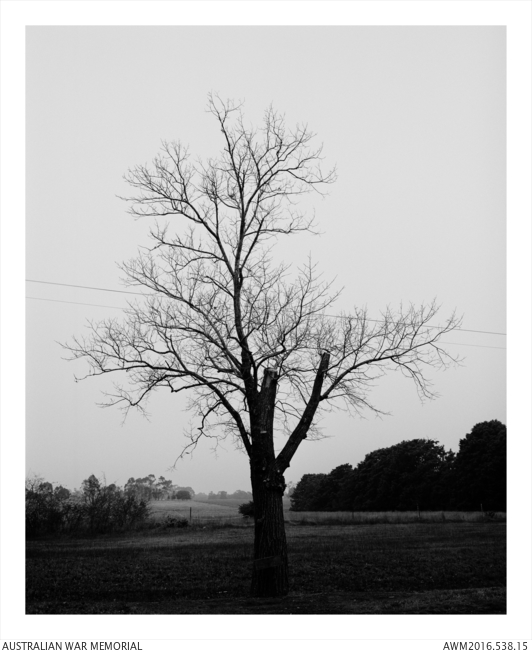 Photograph of the tree planted on the Avenue of Honour, Ballarat, Victoria, in recognition of the service of 1205 Private James McCrae, 4th Light Horse Regiment. This photograph is from a series of 22 images taken by Trent Parke titled WW1 Avenue of Honour.

Artist's original caption: Private James McCrae 1205
4th Light Horse Regiment A.I.F.
Enlisted: Aged: 21 years and 7 months: 12th July 1915 (Accidently Killed 15.06.16)
“Dear Sir, It is my painful duty to advise you of the following circumstances which were adduced at a court of enquiry held in Egypt on 17/6/16, surrounding the regrettable loss of your son, No. 1205 Private McCrae. 4th Light Horse Regiment. It appears from evidence that he was on patrol duty at the time with another soldier, and they were moving along the railway track about 600 yards from the bridge at Abu-el-Akhdar. A train came behind them and your son’s horse took fright and bolted with him, and attempted to jump the bridge but fell. Your son being thrown heavily and the horse falling on top of him.
Every possible assistance was rendered, but he never regained consciousness. The decision of the court was that ‘Trooper McCrae met his death by accident on June 15th and no blame can be attached to anyone’.”
Excerpt of letter dated 10th October 1916 to Mr.J.J.McCrae from Major. Officer I/C Base Records/National Archives Of Australia