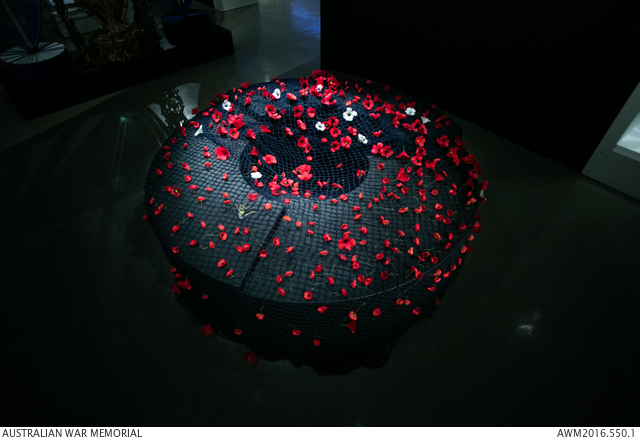 "My craft carries the storyline of my ancestors where I weave fish nets and use bird feathers in a craft that was handed down from my maternal great-grandmother Christina. She was skilled in the old ways of weaving baskets and use of feather adornments but developed new traditions of making feather flowers and bouquets in order to make a living during the Depression era. I am honoured to be able to use my family traditions to remember and honour all of the people who went to war and all those who were left behind." Aunty Glenda Nicholls, 2016

Nicholls is based near Swan Hill in Victoria. She is a Wadi Wadi, Yorta Yorta and Ngarrindjeri woman. An award winning weaver Nicholls learnt weaving and feather craft from her mother and Grandmother. Nicholls’s craft reflects the continuity of her family storyline: the story of her elders and ancestors and the connection between the past and present. 'We Remember’ features a hand woven and dyed netting which forms a pool of reflection. This is decorated with red and white feather flowers resembling poppies. It was commissioned for the Memorial's special exhibition 'For Country, For Nation', curated by Amanda Reynolds in 2016.