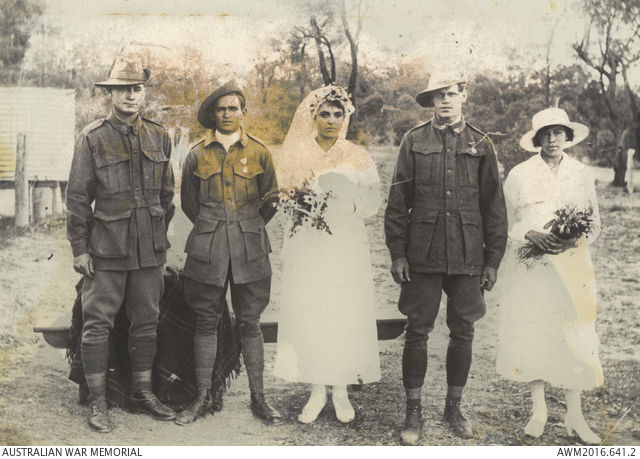 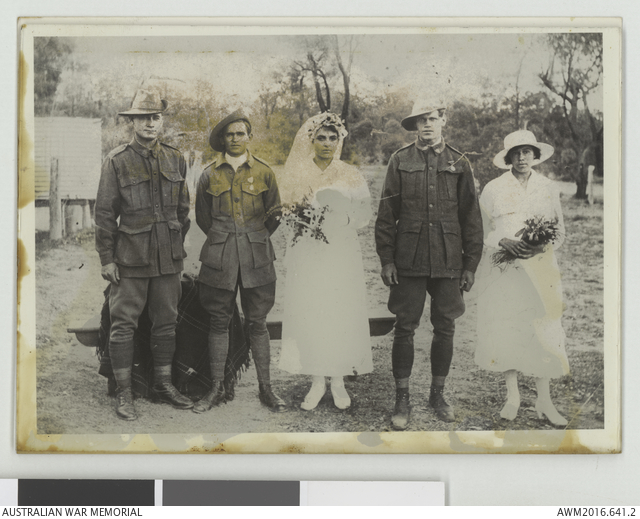 Wedding portrait of William Wallace Chatfield and his bride, Mary Jane Cain. All the men in the photograph are wearing AIF uniforms and are from left to right: N984571 Private (Pte) Harry McLaren, who was born at Cobar, NSW, and enlisted at Coonabarabran, NSW, on 17 September 1918. He was at the Liverpool Camp, NSW, when war ended and was subsequently discharged. The bride groom, 57312 Trooper (Tpr) William Wallace Chatfield, originally enlisted at the Recruiting Office at Mudgee on 14 March 1918. The next day after a medical examination by the Medical Board at Victoria Barracks was rejected; "Unfit for Active Service, Unsuitable Physique (Colour)". Another medical examination on the same day also found him unfit, but due to "Physique not suitable to stand English or continental climate". Chatfield enlisted again on 9 June 1918, this time at Coonabarabran, as a reinforcement for the 1st Light Horse Regiment (1LHR). He sailed for Egypt on 17 August 1918 from Sydney on board the troopship Port Sydney. He joined the 1LHR on 13 October 1918. Pte Chatfield returned to Australia and was discharged on 8 May 1919. Standing between the bride and the bridesmaid, and likely the best man, is 60566 Pte Walter James Williams. Pte Williams, who was born at Gulargambone, NSW, enlisted at Coonabarabran on 9 June 1918. He sailed from Sydney on 4 September 1918 on board the troopship Bakara (A41) bound for England. Although he arrived in England on 14 November 1918, after the war had ended, he was sent to France in January 1919 as a reinforcement to the 2nd Battalion. He returned to Australia and was discharged on 20 September 1919. Standing next to Williams is the bridesmaid Ida Fuller.