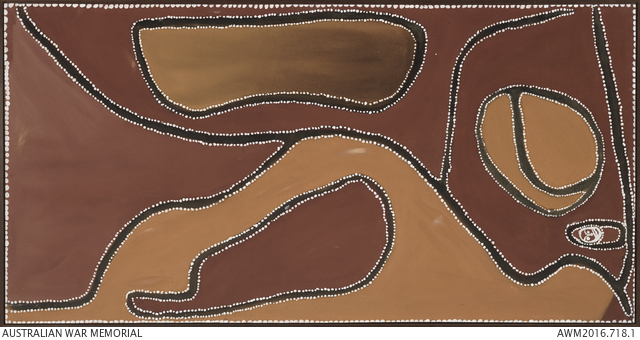 This painting is one of a series of works by Rover Thomas about the ‘Killing Times’ in the East Kimberley region of Western Australia from the 1880s to the 1920s. By depicting such massacres, Thomas intended to create historical records of events that went unreported but had been passed down through oral tradition.

'Ruby Plains Massacre 1' relates the aftermath of a massacre in which the station owner shot dead several Aboriginal men in retaliation for the killing of a bullock. Some days later, Aboriginal stockmen were drawn to the killing site by crows circling above and found the decapitated heads of the men in a hollow tree trunk. Thomas depicted this on the right of the painting, one of the few figurative elements in any of his works. The stockmen left the station in protest and, without labour, it was forced to close.

This incident was part of the pattern of frontier violence in the region, from when settlers arrived in the East Kimberley in the 1880s in pursuit of gold and pastoral land, through to the 1930s. Aboriginal people were denied access to their country, as well as food and water resources. Killing cattle was a strategy to repel the invaders, as well as a food source. Such resistance from Aboriginal people was met with shocking violence, euphemistically described as ‘dispersal’. These stories were well known and preserved via oral history among Aboriginal people.

Rover Thomas was a Kukatja/Wangkajunga man, and one of Australia’s most highly regarded artists. Born in the Western Desert at Yalta, on the Canning Stock Route, around 1926, after the death of his parents he was raised by drovers and became a stockman. He settled at Turkey Creek (now Warmun), where he took up painting in the early 1980s, using local ochres mixed with gum sap. With Trevor Nicholls, he was one of the first two Aboriginal artists to represent Australia at the Venice Biennale. He was an important elder in Aboriginal communities and a central figure in the art of the region.