Shades of the Rum Corps; "Come over here" 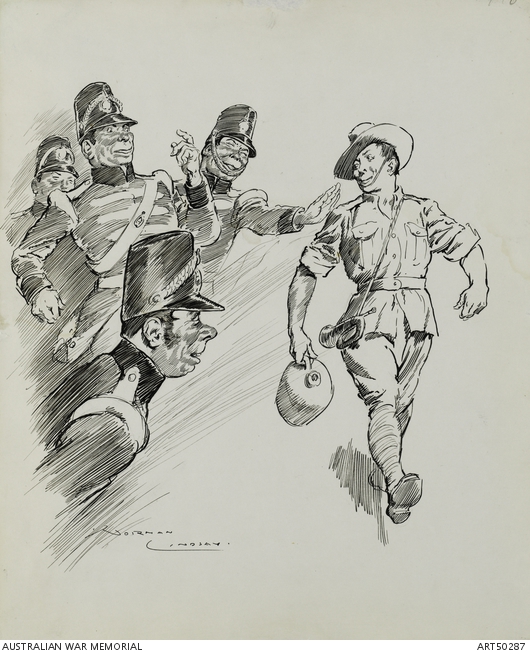 Depicts an Australian soldier from the First World War carrying a rum flagon and with a bugle over his arm. Depicted calling to him are four British soldiers from the period of the New South Wales Corps aka The Rum Corps. The corps was formed in England in 1789 as permanent regiment to relieve the marines who had accompanied the First Fleet. The regiment was comprised of officers on half pay, troublemakers, soldiers paroled from military prisons and those with few prospects. It became known as the 'Rum Corp' because of the monopoly its officers held over the lucrative rum trade, taking full advantage of the shortage of official currency in the colony at the time. Rum was used in place of cash. The economy had developed and diversified somewhat by 1806, but Governor Bligh arrived determined to bring the Corps and especially John Macarthur, to heel and stamp their trading in rum. This led to the Rum Rebellion and the eventual recall of the NSW Corps.