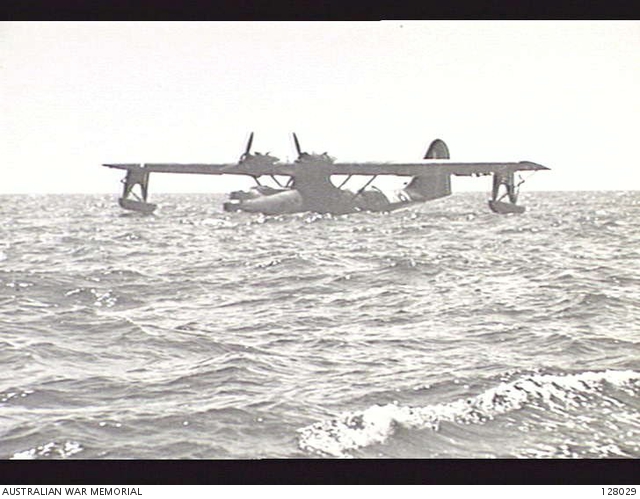 The crew of the disabled Catalina aircraft, serial no. A24-96, code RK-E of No. 42 Squadron RAAF in their dinghies preparing to move across to the Catalina aircraft of No. 43 Squadron RAAF which came to rescue them. The aircraft had come down near Japanese held territory. On the night of 14 January 1945, during a mission to Surabaya, a plane from No. 42 Squadron RAAF, captained by Flight Lieutenant (Flt Lt) Harrigan, experienced trouble with its port engine and immediately began to lose altitude. At the time Flt Lt Harrigan was flying at 300 feet below heavy cloud off Sumba Island. He jettisoned his mines, but the plane continued to lose altitude and he was forced to alight on the open sea. The hull of the Catalina aircraft was damaged and began to leak. However, the water was kept down by baling. Using the radio-telephone, the crew was able to make its position known to returning minelayers. All night they worked on the faulty engine, but without success. However, in the morning, a Catalina aircraft of No. 43 Squadron RAAF, captained by Flt Lt Ortlepp, landed in the heavy swell, covered by a Liberator aircraft, and took off Flt Lt Harrigan's crew. Flt Lt Ortlepp then destroyed the disabled Catalina aircraft with machine-gun fire and returned safely to base.