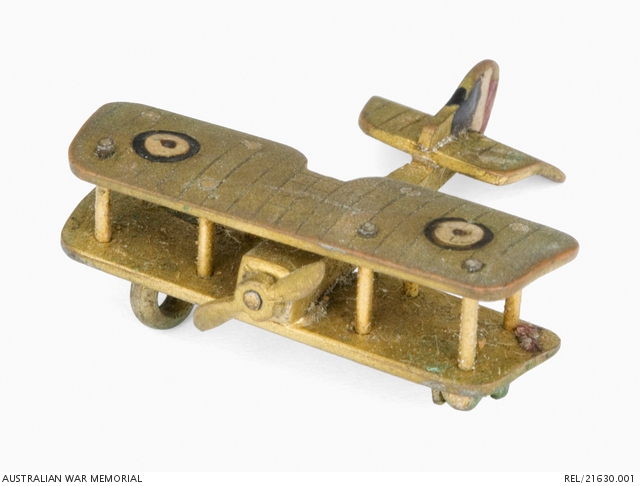 Gold coloured handmade brooch in the shape of a Sopwith Camel biplane. The plane has a rotating propeller. The wings are painted with blue, white and red roundels and the tail has also been painted blue, white and red. The pin, situated under the lower wing has broken off but the hook is still attached.

Associated with the service of Walter Edwin Betts. Betts was born on 1 June 1898 in the United Kingdom. He served with the Royal Naval Air Service and then the Royal Air Force during the First World War. During his service he made small Sopwith Camel brooches to give to his female relatives. In 1923 he emigrated with his wife, Muriel, to Australia. During the Second World War he enlisted in the 2nd AIF, serving with 2/2 Army Field Workshops in Egypt and Greece. Betts was captured by the Germans in Greece and imprisoned at Stalag 18A at Gratz, Austria. As a private he was able to be put to work by the Germans under the Geneva Convention. One of his jobs during his captivity at Stalag 18A was to work as a handyman for the Gratz tramways. Betts returned to Australia and was discharged on 9 April 1946. He died on 13 November 1981.