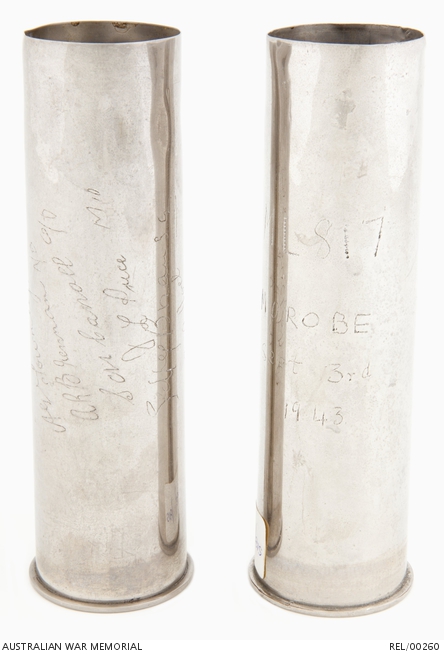 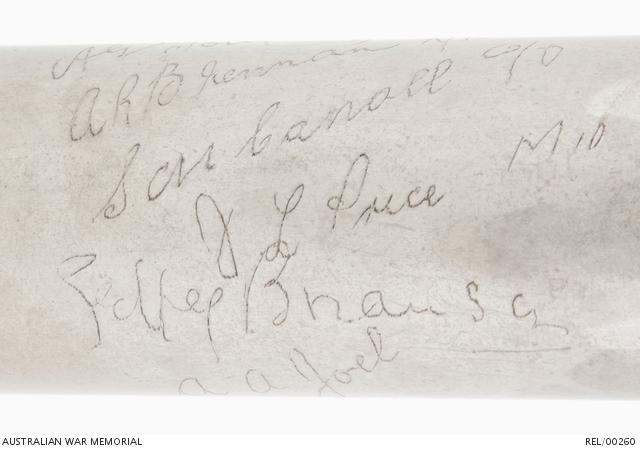 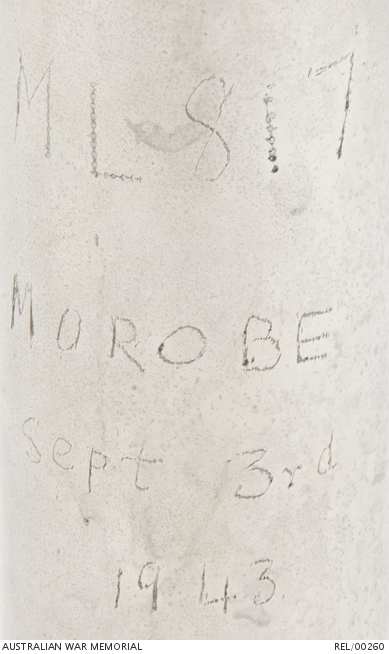 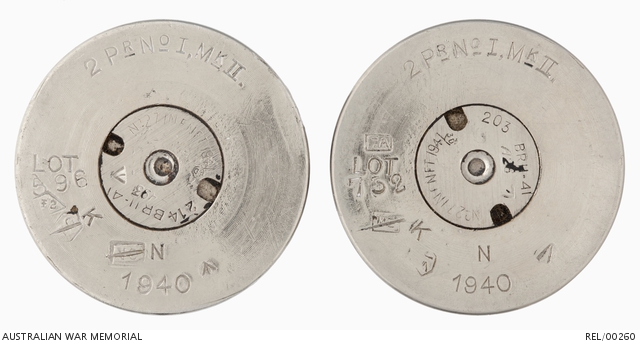 Shell cases retrieved by Asher Alexander Joel, born Stanmore, NSW on 4 May 1912. Joel left school at fourteen, beginning his career in public relations and journalism with The Daily Telegraph (1927-1931) where he worked as a copy boy and messenger and later as a cadet reporter for the Labour Daily (1931-1937). In 1938 he acted as a publicity officer with the NSW government involved with Australia's celebration of King George VI's coronation, and also of Australia's 150th Anniversary celebrations. Joel initially enlisted with the AIF on 7 September 1942 at Audley, NSW and began training with 1 Battalion, before re-enlisting on 4 November with the Royal Australian Navy (RAN); he had already attained the rank of Lance Corporal before his transfer. Appointed Paymaster Sub-Lieutenant with the RAN Volunteer Reserve (RANVR), Joel commenced service at the shore establishment HMAS Magnetic in Townsville, Qld, rising to the rank of Lieutenant by mid-February 1943.

After work at HMAS Lonsdale in Melbourne from 26 April to early August 1943, Joel was transferred to the recently commissioned RAN Shore Base, HMAS Basilisk at Port Moresby, and was appointed Staff Officer (Operations), assisting Commander Geoffrey Branson (Naval Officer in Charge, Milne Bay). He served in operations aboard the Australian Fairmile motor launch ML-817, commanded by Lieutenant Townley which left Milne Bay on 1 September, observing and co-ordinating, with Commander Branson, the movement of convoys of troops and equipment from Port Moresby, Milne Bay and Morobe via Buna up the east coast of New Guinea for the impending landings at Lae. ML-817 had reached Morobe by 3 September. The preparatory allied air raids on Madang and Wewak brought a Japanese air raid to Morobe on the same day, with nine Betty bombers and 27 fighters attacking the assembled invasion fleet. Sticks of anti-personnel bombs straddled ML-817 as it lay next to HMAS Shepparton. 'Some [bombs] came unpleasantly near, and ML.817 collected about 40 holes on the port side,' recalled Branson. In fact, the bombs 'had lifted her right out of the water and had caused constructional damage. Her timbers were distorted and propeller shafts and engine accessories thrown out of alignment' according to the Official History (Navy Vol II pp 328 - 330). Despite the damage, ML 817 quickly slipped its moorings and opened fire on the bombers; the only ship to manage such a quick response that afternoon. Joel recovered two of the anti-aircraft shells fired at the bombers, and the incident was recorded by an eyewitness as ART28100. The fairmile limped back to Milne Bay and was towed back to Australia for repairs; Joel remained in Milne Bay.

After a short period serving as RAN Liaison Officer on the Staff of Admiral Kincaid, Commander of the United States Seventh Fleet, in August 1944, he was transferred to the staff of General MacArthur's Headquarters, South-West Pacific Area as RAN Information Liaison Officer. His duties were outlined as 'securing for the RAN adequate representation in GHQ Communiques and to speed up their release; securing information regarding RAN operational activities for dissemination to the press; and to generally watch RAN publicity interests at GHQ.' Joel performed his job admirably, remaining with US Armed Forces from Hollandia through to the invasion of the Philippines, using this typewriter throughout this period. He recalled typing up the first details of the Australian fleet involvement in the Battle of Lingayen Gulf for press release. For his work in this capacity, the Americans awarded Joel the Bronze Star. After discharge from the RAN on 17 August 1945, Joel started a public relations firm, and later entered NSW state politics. Joel was awarded an Order of the British Empire in 1956, made a Knight Bachelor in 1971 and a Knight Commander of the Order of the British Empire in 1974. He died in 1998.