A flight of three Lockheed Hudson aircraft from No. 23 Squadron RAAF based at Amberley. Nearest ... 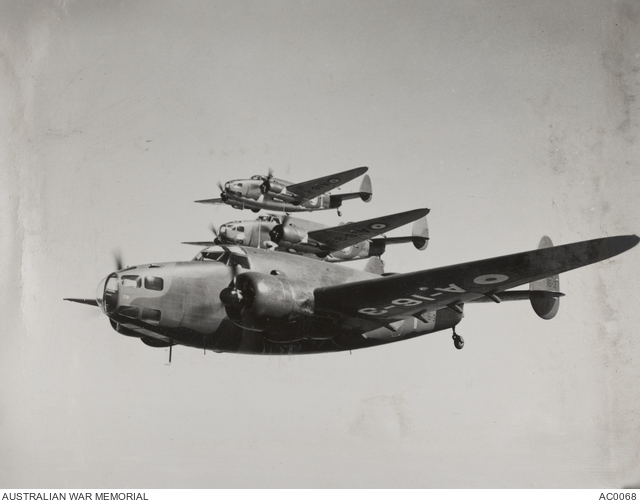 A flight of three Lockheed Hudson aircraft from No. 23 Squadron RAAF based at Amberley. Nearest camera is A16-3 flown by 22 Flight Lieutenant (Flt Lt) Phillip Walter Howson, OBE. In the centre is A16-38, flown by 251607 Flying Officer (FO) Edward Andrew Dorward, and at rear, A16-47, flown by 260518 FO Oscar George Diethelm. All four Lockheed Hudson photographs (AC0058, AC0066 AC0067 and AC0068) were taken by Flt Lt John Harrison from Wirraway A20-115, flown by Commanding Officer of 23 Squadron, regular officer 80 Squadron RAAF Leader Dixie Robison Chapman. Of note is the unusual, small RAAF serial applied to the tailplanes of A16-3. A16-38, a 32 Squadron Hudson flown by Wing Commander Deryck Kingwell, was badly shot up in New Guinea on 31 March 1942. After repair it was issued to No. 1 Operational Training Unit (1 OTU), Bairnsdale, Vic, when it was flown during a press demonstration at Bairnsdale, on 27 October 1942 by Flt Lt Frank Tampion, lost its starboard mainplane and crashed and burned 'in shot' of Fox Movietone and Cinesound Newsreel cameraman Geoff Thompson. The film was impounded and used in the subsequent enquiry, which eliminated the rumour that undetected corrosion caused by an undetected Japanese bullet hole was responsible; the cause was determined to be a poorly repaired mainplane. In the interim, however, eighteen 1 OTU Hudsons were withdrawn during November 1942 for mainplane replacement. A16-3 was on strength with 1 OTU when the unit was called on at short notice to provide aircraft for the air supplying of allied troops at Buna. A group of twelve Hudsons was formed, known as 1 OTU Detached Flight, including A16-3, flown from Bairnsdale to Ward's Drome at Port Moresby, and began operations on 14 December 1942, flying over the Owen Stanley Mountain Range to drop supplies at Soputa and, later, landing at Dobodura. Flown by Flt Lt Neville Hemsworth, with Sergeant Bert Rodd and Flight Sergeants Robert Bamber and Henry Stephens as crew, A16-3, taking off from Dobodura with four wounded infantry aboard at 11.00 am on 26 December, was attacked by several Ki-43 Oscars from the 11th Sentai and chased south to Hariko. An incendiary bullet started a fire and Hemsworth ditched the Hudson into Oro Bay near Hariko, resulting in the drowning of the two stretcher bound wounded. A US Navy PT Boat picked up the survivors, but Stephens died of burns the next day, while Hemsworth was badly burned about the face and arms and Bamber wounded by gunfire. The ditching was witnessed and sketched by Official War Artist Roy Hodgkinson (who comments that the Hudson made 'a perfect belly landing on the sea') and appears in the Memorial's collection as ART21695. A16-47 was attached to the RAAF's Survey Flight in early 1944, then based at Lowood, Queensland. On 23 July 1945, A16-47, crewed by Flt Lt Lance Clarke, FO Thomas Steel and Leading Aircraftman (LAC) Frank Chiverton, and carrying as passengers the Flight's new Commander, Squadron Leader Nigel Pilcher plus unit members Corporal Bill Gaze and LAC Walter Nielson and Squadron Leader Cuthbert Griffin, departed for Bowen to visit the Flight's Anson detachment. They never arrived and despite a week long search, were never located.