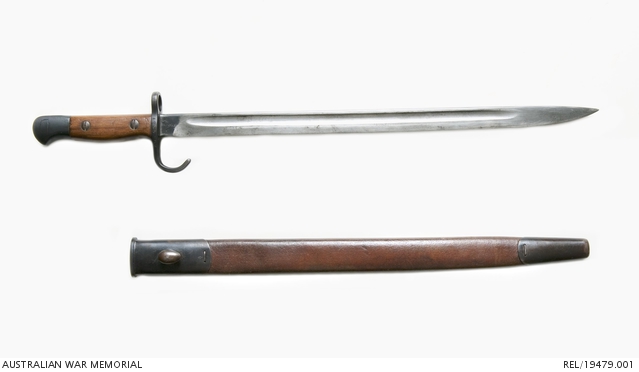 Pattern 07 Bayonet. The hilt has a hooked quillon muzzle ring crossguard, two piece wooden grips held to the tang by two screw bolts and the pommel has a T section mortice slot and a push button locking catch. The cross guard is marked '16.A.I.H.917' on the left and '4MD 5931' on the right. The pommel has an arrow head mark within a 'D'. The left hand wood grip is damaged with small line indentations. The single edged polished blade has a fuller on each side to within 80 mm from the point. The blued ricasso is stamped with a crown over ' 1907 EFD II'II ' (November 1911) on the left and proof marks on the right.

This bayonet was carried on Gallipoli by 1278 Lance Corporal Albert Hembury. Hembury enlisted into the AIF on 12 September 1914. He embarked from Melbourne on board HMAT Ceramic on 22 December 1914 with 16 Battalion ‘H’ Company. after a period of training in Egypt he landed at Gallipoli with 16 Battalion. He was there for around a week before being admitted to hospital in Alexandria with Rheumatism on 2 May 1915. while recovering from the Rheumatism in No. 2 general Hospital in Cairo he came down with Typhus in June. He returned to Australia on HMAT Ulysses on 30 September. He was admitted ot hospital in South Australia in October . He was discharged from hospital in February 1916 and was discharged medically unfit a few days later on 4 February, due to Neurasthenia. Hembury later married and he and his wife received a pension for his incapacitation from October 1916 until October 1917, when he was deemed to have sufficiently recovered. The Pattern 1907 sword bayonet was made for use with the Lee Enfield .303 rifle. The introduction of the Pattern 1907 bayonet was approved on 30 January 1908. The inspiration for the bayonet came from the 1906/07 Trials Japanese Pattern Type 30 Arisaka bayonet. All bayonets manufactured up to 1913 featured a hooked quillon. On 29 October 1913 approval was granted to remove the hooked quillon from the crosspiece and resulted in a new pattern of the 1907 Sword bayonet being sealed. There was no advance in the mark number for the new look bayonet and many of the earlier models had their hooked quillons removed during repair. Overall more than 5 million Pattern 07 sword bayonets were produced by manufacturers in England, Australia, India and the USA and issued to Australian, British and Commonwealth forces during the First and Second World Wars.